In 1895, there was an account of Tan Hood Swee (cashier at Messrs. Lambert Bros. and son of Government Contractor, Tan Kim Teck) who rushed to the aid of a Major McCallum, who injured himself in the head when the horse of his paladin bolted as he was getting out of it. The only other info i have was about Tan Hood Swee and a brankruptcy notice taken on him in 1933. 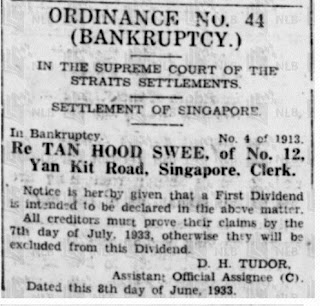