May 16, 2012 Block 5 Division B Bukit Brown Hill 5 pegged
Ng Kah Ghee (1885-1941) was the managing director of chop Bee Huat or Bee Huat & Co, a company that supplies motor oil for a booming transportation industry. He was also the Vice President of the Socony Athletic Club for a number of years after it was formalised around 1929 with proper Annual General meetings. The club's first anniversary was held at Mr Aw Boon Haw's bungalow at Pasir Panjang who lent it for the ocassion. (Socony is short form for Standard Oil Company New York). 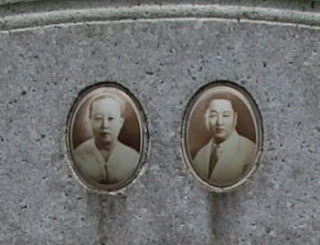 Mr Ng Kah Ghee pased away on May 26, 1941 at his residence at No 23, Lorong 27-A Geylang at the age of 56 while Mrs Ng Kah Ghee passed away on Aug 11, 1955. They are buried in Block 5 Division B and is affected by the 8 lane highway. He left behind 5 sons ( Cheng Hoe, Cheng Ann, Cheng Kiat, Cheng Chwee and Cheng Bok ) and 5 daughters.
Bee Huat and Company
Bee Huat & Co operated from No 29 Beach Road during the time when the demand for motor vehicles were booming. Mr Ng Kah Ghee's company established itself as one of main agents for SOCONY - Standard Oil Company New York.

After Mr Ng Kah Ghee's passing in 1941, the Bee Huat and Company continue to do well with the service station operations in Orchard (Tanglin Service Station) and Beach Road. His son, Ng Cheng Ann was the manager director of the company.

Ng Cheng Bock took over as the manager (in addition to being of the directors of Bee Huat) of the Esso Service Station (Esso Tanglin Service Station) in 1968.