March 14, 2012 Block 3 Div C Bukit Brown Family - Chew Boon Lay Hill 3
Chew Boon Lay (周文礼) (1852-1933) was born in a small village in Changchow, Amoy. He became an orphan in his late teens and decided to take up his uncle's invitation to come over to Siam (formerly Thailand). He laboured hard under this tyrant of an uncle who paid him nothing and made him work from dawn to dust.

On a faithful evening, 3 years after being practically been a slave, a visitor was said to have stole a sum of money and this uncle put the entire blame on Chew Boon Lay and threatened to turn him in to the police. In desperation, Chew Boon Lay came up with an idea to win the money through a stake on a lottery. Borrowing 1 tical from his sympathetic aunt, he prayed before Kwan Yin, the Goddess of Mercy and in a moment of delirium or what is said a miracle, he heard two characters been spoken to him. He won, paid his uncle and with whatever left over vowed never to work for his uncle again and went on to strike it on his on.

Chew Boon Lay went on to become a clerk at a sailing ship plying between Bangkok and Singapore. He was a man with a clear mission and after a number of years decided to strike it on his own, buying an old junk after consulting Mazu, the goddess of all seafaring persons that said that he will have a prosperous voyage.Well, his old junk sprung a leak after setting sail. Not wanting to incur losses by returning, he persevered, his crew almost mutiny against him seeing that the leak was becoming worst and that Chew Boon Lay was still refusing to return. Chew Boon Lay, holding a statue of Mazu at one hand and an axe on the other, prayed one last time for intervention and somehow through an act of miracle, the leak resided and the threat of sinking subsided. Upon reaching Singapore, he found out the reason the leak resided was because a black sea snake had plugged the leak !

His luck continued after he decided to stay on in Singapore to be a merchant, and after some time he started manufacturing soap (chop Leong Tye) and later Ho Ho Biscuits. 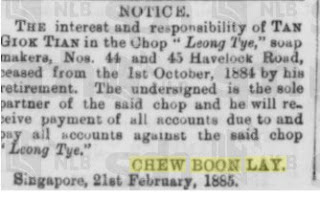 He eventually founded Ho Ho Biscuit using modern machinery in 1898 at 33 Chin Swee Road.  The business expansion was a result of the Go (later changing their names to Gaw) family from Semarang, Indonesia who chanced upon this biscuits  and wanted to partner with Chew Boon Lay, providing valuable financial backing (useful in a time where there are no banks yet) and leverage on Chew Boon Lay's expertise to expand their business on an international level. Four years later, Ho Ho Biscuit won a prize in the International Food Fair in Hanoi.

When Chew Boon Lay eventually retired from active management in 1918, the management of the factory passed on to Mr Gaw Khek Khiam (managing director) and his eldest son, Chew Hock Seng, (manager). It's factory also expanded to Batavia (now Jakarta) in 1931. He also expanded into buying land especially marshlands and former gambier lands around Jurong area and also in Kukup  and Kota Tinggi area, Johor - turning it into an upcoming cash crop of that time, Rubber ! It was said that he started a brick-making factory in Pulau Tekong  around 1912, but because of high fatality rate among his workers there, he decided to sell it rather than commit more workers to their deaths.

Chew Boon Lay married Miss Ong Cheng Neo, a nonya from Melaka. The Chew clan household was at 141-A /B Devonshire Road. After his death on 2th June 1933, the responsibility of the Chew family household went to his eldest son, Hock Seng. The estate distribution or probate were handled by Hock Seng and Hock Lee. Chew Boon Lay left behind his wife, six sons, three daughters, six daughters-in-laws, three son-in-laws, 52 grandchildren. He is buried in Block 3 Division C, plot 684. He was listed as 82 years of age.

If you find this article interesting and want to research further, do check out the family tree book of Mr. Chew Boon Lay, published by his descendants which contains a rich number of photos of him and his family, including his children and grandchildren. 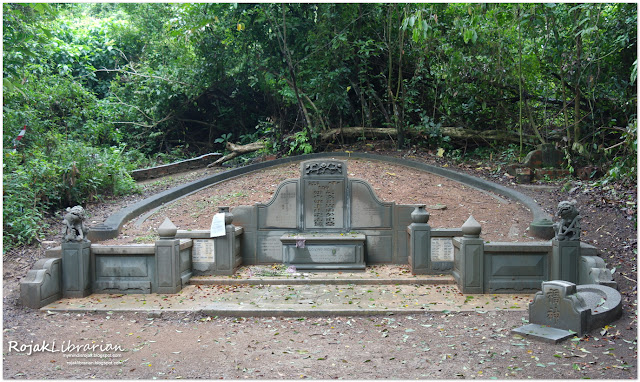 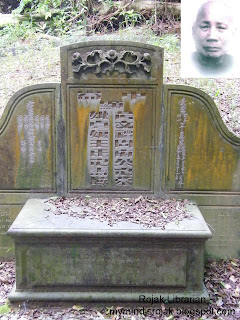