June 10, 2017 Block 2 Division B Bukit Brown Family - Tan Kim Ching Family -Tan Tock Seng Hill 2
Tan Kwee Wah (29 September 1880 - 21 April 1927) was born in 1880 and is the son of Tan Soon Toh. He was educated at the Anglo-Chinese School , Anglo-Chinese Free School and finally at Raffles Institution. Tan Kwee Wah joined the firm of Kim Ching & Co and assisted in the management of the estate of the late Tan Kim Ching. Later, he and Tan Kwee Swee took out probate of the will of Tan Kim Ching and acted as trustees until the estate was finally wound up. Tan Kwee Wah made many investments in property and later rubber plantations. His company was called Tan Kwee Wah & Co. which in the article below describes its business and business address at 28, Boat Quay.

Tan Kwee Wah was one of the original members of the Chinese Co, Singapore Volunteer Infantry (SVI) and one of the Chinese representatives in the Coronation Contingent to London in 1902. He was a dedicated volunteer and received promotion to 1st Lieutenant in 1916.
In an interesting article in 30th June 1902, it describes The Straits Contingent arrival in Alexandra Palace Grounds. For the first time in England, there is a unit which consists of Chinese Volunteers, British Born Chinese from Singapore (British subjects of Singapore). Within this unit are Chinese Millionaires and the journalist of the article draws parallel with Roosevelt's Roughriders in the Spanish-American War. Among the members are Dr. Lim Boon Keng (member of the Singapore Legislative Council), Song Ong Siang (Barrister-at-law). Other members of this small unit includes, Tan Boo Liat, (merchant prince of Singapore, a great sportsman, owner of Vanitas, which won the Calcutta Cup. It went on to describe the brother of Tan Boo Liat, Tan Kwee Wah and another wealthy Chinese, Tan Hood Guan. 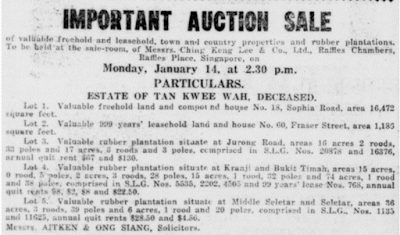 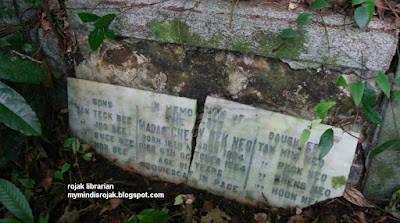 Brother: Tan Boo Liat (1875-1934)
Tan Boo Liat described as the merchant prince of Singapore, a great sportsman, owner of Vanitas, which won the Calcutta Cup and like his grandfather, Tan Kim Ching, maintained ties with Thailand and was given the title of Phra Anakul Sayamkitch.
Brother: Tan Kwee Swee (1879 -1937)
The fourth son of Tan Soon Toh and a great grandson of Tan Tock Seng, Tan Kwee Swee passed away on 29 January 1937  at his residence in No. 8 Swanage Road. In that article, it mentions Tan Kwee Swee as a prominent resident and father of two Queen's Scholar, Mr. Tan Thoon Lip and Miss Maggie Tan (nee Maggie Lim, first female school girl from Singapore to receive the award).

Daughter: Elsie Tan Kim Neo (1905-25th August 1939)
Miss Elsie Tan married Mr. Edward Chia (eldest son of Mr and Mrs Chia Lip Choon of 8 Pinangsia, Batavia) in April 1924. Elsie Tan passed away on 25th August 1939 at the age of  34. From the burial registrar i found out that an yet unnamed infant boy is buried together with Elsie. This is a tomb of a mother and her son (maybe died during child birth ). Listed on the tomb are the names of her sons; Chales / Charles Chia, Henry Chia, Frank Chia, Lewis Chia and daughters; Katharine Chia, Dorothy Chia, Angeline Chia, Annette Chia and Margaret Chia. The tomb is at Hill 4 Section C, plot 1371.