June 01, 2017 Block 2 Division B Bukit Brown Hill 2 sikh guard
Madam Wee Jee Neo passed away at the age of 73 on 31 January 1933 at her residence in No 64, Wilkie Road. She is the mother of Messrs. Tan Ong Seng of the Supreme Court and Tan Hong Chuan of the Union Trading Co. 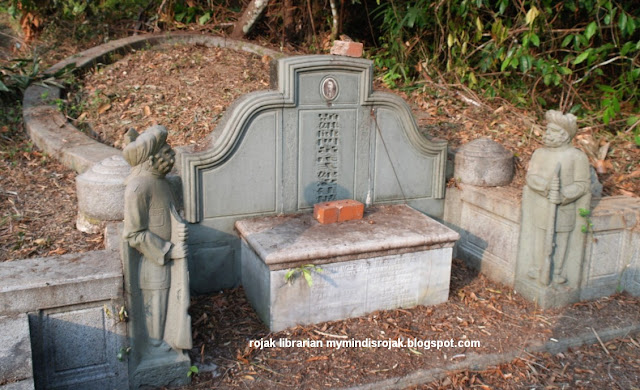 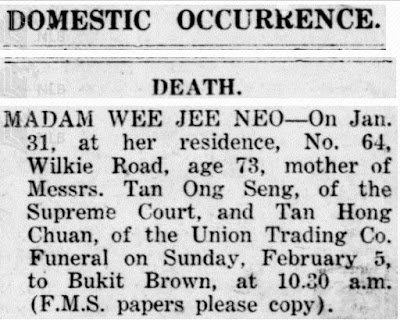 Son: Tan Ong Seng
Tan Ong Seng was a Chief Clerk of the Singapore High Court and the recipient of the Certificate of Honor by the Colony Governor in 1939 for his loyal and valuable service to the Straits Settlements.  He was in service for 37 years and worked in the Sheriff's Office, Land Office, Colonial Secretary's Office, police and district courts before being transferred to the the High Court where he served as Chief Clerk and Commissioner of Oaths of the Singapore High Courts. He retired in April 1939 at the age of 54 and has 2 sons. The article also mentioned that he was a good soccer and table tennis player in his younger days. When he retired as Chief Clerk, the role was taken over by Mr. Ee Toon Hee.


The Sikh guard of Madam Wee Jee Neo's tomb is beautifully crafted and a rare sight in Bukit Brown. For the list of other Punjabi/Sikh in Bukit Brown.