Madam Chan Guek Neo passed away on 10th December 1929 at her residence, no 140 Rangoon Road. She was 55 years of age and leaves behind a son, Hoe Keng Hock and two daughter and two son-in-laws (Messrs. Wee Song Kay and Chan Kim Seng ) to mourn her loss. According to the obituary article, she was buried in Bukit Brown, however on the tomb no date and age was engraved but a further check on the burial registrar provides evidence of this burial. This shows that we can't always assume no one is buried there if there is no dates engraved. Husband and wife died in 1929 and are buried in Hill 3 Section A, plot 357 and 381. 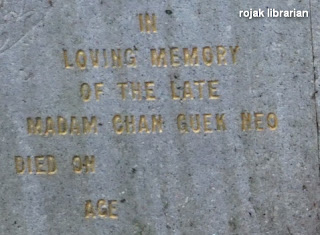 
Kusu Island is one of the Sourthern Islands of Singapore accessible by public ferries from Marina South ferry terminal. A Chinese temple and three Malay keramat (shrine) on the island are the main attraction which draws pilgrims to pray annually. Kusu means “tortoise” or “turtle” in Hokkien. The shrine is popular with devotees seeking divine intervention from this Malay "saints" in the form of wealth, marriage, fertility, good health and harmony.  Up 152 flight of steps are the 3 Malay Keramat or shrines of this "saints" dedicated to Syed Abdul Rahman while the other two are believed to belong to his mother, Nenek Ghalib, and his sister, Puteri Fatimah Shariffah. There are inscriptions in 3 languages (Chinese, Jawi and Malay) which describes the visit of Dato Nenek to Hoe Beng Whatt at his residence in 140 Rangoon Road in 1917 and has the legend goes via his dreams requesting for the construction of the shrine and in return, success in business will be granted. Whether this is true or not, Hoe Beng Whatt and other benefactors which include; Tay Guan Kiat, Ong Chwee Tow, Tan Seng Chong, Kum Peng Huat, Yeo Wah Hin, Mrs. Tay Kim Neo.