November 24, 2011 Block 3 Div D Bukit Brown Family - Tan Tock Seng Hill 3 Singapore Chinese Girls School
Tan Boo Liat (陈武烈 1875-1934) was born into a well known and established family in Singapore. He is the son of Tan Soon Toh (1853-1892), the grandson of Tan Kim Ching, (陈金钟, 1829-1892) and great grandson of Tan Tock Seng (陈笃生, 1798-1850). Tan Boo Liat was one of the pioneer members of the Straits Chinese British Association when it was first formed in 1900. The President of the Association was Tan Jiak Kim and Vice President, Seah Liang Seah. He was the owner of the mansion called Golden Bell Mansion (named after his grandfather, Tan Kim Ching) in Mount. Faber. On December 15, 1911, Chinese revolutionary leader Dr Sun Yat Sen, stayed the night here, immediately after his arrival from Europe.
Tan Boo Liat was instrumental in the formation of the Singapore Chinese Girl School (Sing Po Chung Kwo Hsio Tang) located at Hill Street in 1899.  The President then was Lew Yuk Lin (Chinese Consul) and Vice Presidents; Khoo Seok Wan and Tan Hap Seng, Treasurer; Tan Boo Liat, Secretary; Ong Soo Tee. His residence from what i researched is 8 Simons Road.

Tan Boo Liat became a instant celebrity among the race horse community when his horse, "Vanitas" won the Viceroy Cup on December 26, 1898 at Calcutta, India making it the first horse from Malaya to do so. Along  with the trophy is the princely sum of $100,000.  Vanitas continued its racing career after its return to Singapore and won in 1899, the Singapore Derby for the third successful time. By 1900, age caught up with the champion and Vanitas was retired at Tan Boo Liat's house, "Mafeking" at Confederate Estate.

Tan Boo Liat gravestone depicts a ray of light & on its side two bells.The ray of light indicates his staunch support of the Kuomintang Movement, while the bells are symbols of his mansion. The gravestone also indicates his given title awarded by the King of Siam - Phra Anakul Sayamkitch. This is because he and his family (especially his grandfather, Tan Kim Ching) has close relationship to the King of Siam due to the business dealings they have. 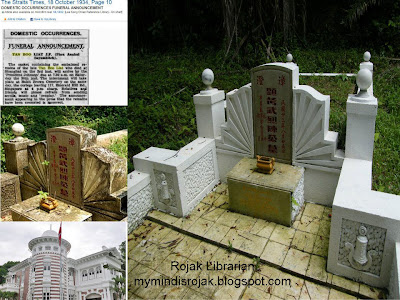 Tan Boo Liat is buried Block 3. Division D. His plot no is 520. The tomb is located just behind the iconic colorful sikh guard of Mr Chew Geok Leong.

The funeral of Madam Kwok Kim Neo (the wife of Tan Boo Liat) was reported to took place in Bukit Brown on June 1, 1932.

Brother: Tan Kwee Swee (1879 -1937)
The fourth son of Tan Soon Toh and a great grandson of Tan Tock Seng, Tan Kwee Swee passed away on 29 January 1937  at his residence in No. 8 Swanage Road. In that article, it mentions Tan Kwee Swee as a prominent resident and father of two Queen's Scholar, Mr. Tan Thoon Lip and Miss Maggie Tan (nee Maggie Lim, first female school girl from Singapore to receive the award).

Brother: Tan Kwee Wah (1880 -1927)
Tan Kwee Wah was educated at the Anglo-Chinese School, Anglo-Chinese Free School and finally at Raffles Institution. Tan Kwee Wah joined the firm of Kim Ching & Co and assisted in the management of the estate of the late Tan Kim Ching. Later, he and Tan Kwee Swee took out probate of the will of Tan Kim Ching and acted as trustees until the estate was finally wound up. Tan Kwee Wah made many investments in property and later rubber plantations. His company was called Tan Kwee Wah & Co. which in the article below describes its business and business address at 28, Boat Quay. From the tombstone of Mr and Mrs. Tan Kwee Wah, we know the names of the children:
Sons: Tan Teck Bee, Tan Joo Bee, Tan Swee Bee, Tan Hor Bee, Tan Teck Lee, Tan Teck Leng, Tan Teck  Hock
Daughters: Tan Kim Neo, Tan Peck Neo, Tan Keng Neo, Tan Hoon Neo


Daughter: name unknown
The Malayan Tribune in 14 January 1929 reported the tragic death of his little daughter.