November 24, 2011 Block 5 Division D Bukit Brown WW2-Tours WWII
Tay Koh Yat (1880-1957) C.H., O.B.E,  was born in Kinmen in 1880 and came down to Singapore in 1902 at the age of 22 as a poor immigrant and got a job as a $2-a-month clerk in a Chinese shop were his duties include sweeping floors. He then joined Chop Guan Seng Hin as a partner.At the age of 32, he established Guan Soon (branches in Indonesia and Penang), followed by Aik Seng Hin and finally Chin Joo Seng and Co. His name (to a much older generation of Singaporeans) is linked to his namesake bus company called Tay Koh Yat Bus Company. Starting from just 2 buses in 1921, it went on to become one of the largest in the colony. He was also a director of the Chung Shin Jit Poh, a Chinese newspaper and committee member of the Singapore Chinese Chamber of Commerce and Hokkien Huay Kuan. Tay Koh Yat was also a chairman of the Thong Chai Hospital at Eu Tong Sen Street.

A lesser known fact was Tay Koh Yat's involvement and contributions in the war effort and post war claims making him a war hero in every sense. He was an important personality involved in War Fund collection and assisted in the war resistance against the Japanese. He, together with other prominent leaders helped mobilised the Singapore Chinese civil defence force in the critical months before the fall of Singapore in February 15, 1942. The numbers were estimated about 10,000. When the Japanese invaded Singapore, it made him a wanted person. He, however managed to evade capture by going into hiding in Indonesia.

He was the Chairman of the Singapore Appeal Committee during the trials of Japanese war criminals. He together with the committee of prominent Chinese men were tasked to provide and gather eyewitness in the proper prosecution of the war criminals. In a Singapore War Crimes court ruling in 1947, two war criminals were sentenced to hang for being directly responsible for the massacre of 5,000 Chinese after the fall of Singapore. (what is better known as the Sook Ching massacre). They were Lieutenant-General Kawamura and Lieutenant-Colonel Oishi. Five other japanese officers served life imprisonment. Tay Koh Yat was allowed to witness the hanging. 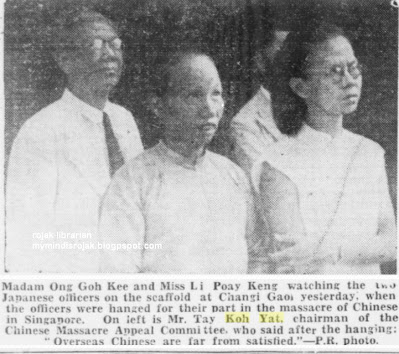 The 50's was also difficult years for Singapore with the growing threats of anti-colonialism, communist sentiments and labour unrest. The article below dated 1951 describes Mr Tay Koh Yat, then already at his 70's rushing to the site where 4 arsonist from attempting to burn his bus and shouting "Tangkap!" which is Malay for Catch!
In 1951, a group of prominent chinese leaders led by Lee Kong Chian, Tan Chin Tuan, Tan Siak Kew, Lien Yin Chiew, Tay Koh Yat and Lee Wee Nam formed a special committee to draw a memorandum to seek the colonial government support to grant citizenship rights to over 250,000 china-born chinese currently residing in the colony. Spoke person of the committee, Mr Tan Siak Kew (vice-president of the Singapore Chamber of Commerce) was quoted to saying; "Times have changed and our hearts are no longer with a China dominated by Chinese Communist".

(Unfortunately for us with more historical hindsight this was not the exact truth).

Tay Koh Yat received the Certificate of Honour in 1950 for his outstanding duties as a citizen of Singapore and for being a great benefactor of various charities. He was conferred the Order of the British Empire in 1952 for his courage in keeping the bus service in operation despite Communist threats and repeated arsons.

Tay Koh Yat passed away at midnight, 29 January 1957 (Chinese New Year eve) at his home at No. 58 Tras Street. He is survived by his wife, seven sons and 3 daughters. On Sunday, February 3, a huge procession of 100 buses, cars, lorries followed his hearse.

In April 1948, over a hundered guest were entertained to dinner by Mr. and Mrs. Tay Koh Yat at their residence in Thompson Road. They were celebrating the marriage of their 3 sons, Messrs. Tay Soo Long, Tay Soo Choon and Tay Soo Hong. Their respective brides were Misses Koh Kwee Giok, Chooi Yoot Seng and Teo Siew Eng. The wedding took place at the Chinese Consulate.