No scrolls or wreaths

Hardware magnate Ho Siew Tian requested no wreaths or scrolls for his funeral. This was because when his wife passed away, he was appalled by the sight of his house being swamped by a pile of some 500 scrolls and 600 wreaths. This story was shared by his seventh son, Mr. Ho Cho Hock.  On the subject of Mr. Ho Siew Tian's wife, if you look carefully at the feet of Mrs. Ho Siew Tian in the ceramic portrait, she has likely bound feet.

Son: Ho Cheow Hin
Ho Cheow Hin was a director of the United Overseas Bank (UOB). Ho Cheow Hin passed away at the age of 75 on 5 July 1971. He leaves behind;
Wife: Madam Pang Chit Neo,
Sons: Ho Sim Guan, Ho Sim Hong, Ho Sim Keng, Ho Sim Teck, Ho Sim Lim,Ho Sim Moh
Daughter: Ho Poh Lim, Ho Poh Kim, Ho Poh Geok, Ho Poh Tin, Ho Poh Choo
Sons-in-law: Yap Giau Jin, Dr. Khoo Boo Yee, Soh Hwee Hua, William Tse
His wife was Madam Pang Chit Neo (sister of Mr. Pang Cheang Yean ). She passed away at the age of 95 on 31 March 1993. The wake was held at 54C Dalvey Road.  One of their sons, Ho Sim Guan became a banking tycoon and one of Singapore's richest man before he passed away at the age of 84 in October 2011. He was a director at United Overseas Bank for over 30 years before stepping down in 2002. Other than banking, he has stakes in breweries, rubber estates and the Haw Par Group (controlled by tycoon Wee Cho Yaw). He also owned Tai Tak Estates ( a private investment firm) and the Tai Tak group of companies. 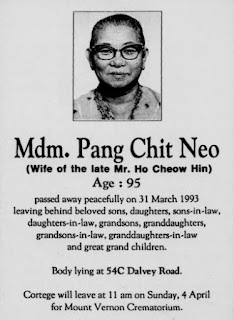 Son: Ho Cheow Chye
In 1960, Ho Cheow Chye (then 60 years), a rubber estate was kidnapped while visiting his estate (Tai Tak Estate) in Kota Tinggi. Fortunately he was released 12 days later after ransom of $60,000 was paid by his wife, Madam Chia Siok Hwee. His kidnapping was linked to the "Oh Kim Kee kidnap kongsi". Branded as Public Enemy No. 1, The 29 year old Oh Kim Hee who was eventually killed by the police in a hail of shots at a flat t 134-B Sims Avenue. In a touching article, i found out that Ho Cheow Chye passed away in 1992 while Madam Chia who had 7 children, 17 grandchildren and 15 great grandchildren passed away at the age of 104 in 9 September 2006. Her story was shared by her second youngest, Mount Elizabeth Medical Centre surgeon, Ho Soon Teck from his home in Fernhill Road where Madam Chia has been staying. Madam Chia was born in Fujian province of China in 1902 before moving to Serukam, Pontianak in Indonesia. Her father was a coconut plantation owner there. She moved to Singapore when she was 23 together with her mother and siblings and was matchmade with trader Ho Cheow Chye.
Sons: Dr. Ho Soon Lye, Dr. Ho Soon Teck, Ho Soon Jin
Daughters-in-law: Woo Chu Fang Angela, Dr. Chen May, Lauw Chu Ying Cecilia
Daughters: Ho Geuh Kheng, Ho Guay Hoon, Ho Guay Koon, Ho Guak Chin
Sons-in-law: Sng Quee Lim (deceased), Sng Bock Choo, Tan Sin Yam Tommy, Chng Hak Ping
(rest of names listed in her obituary notice) 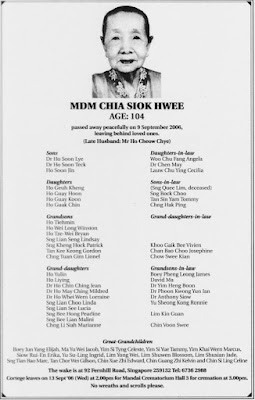 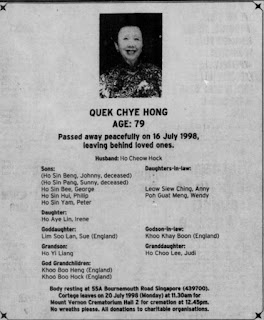 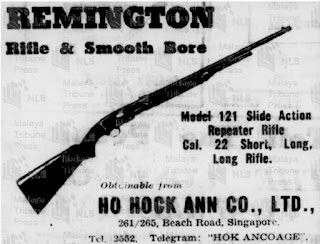 Ho Siew Tian was one of the trustee of the Soon Thian Keng temple (In 1933, he was appointed trustee together with Tan Kim Guan). Other trustees include Seet Teong Wah (See Tiong Wah). The temple has made numerous donations to support education and help support the operations of Chung Cheng School which started out in various locations in Beach Road before moving to a permanent premises in 1938 at Aliwal Street. The school were funded by donations from their founders, trustees and philanthropists including the  Aw Boon Haw Par. Ho Siew Tian was also mentioned in the school annual report in the 1950 as the Treasurer for the school. The building still exist today as a conserved building.
Variant Names
Ho Siew Tian also refers to Ho Siew Tan / Ho Siew Tien
[research on-going]