March 11, 2016 Block 2 Division D Bukit Brown Family - Chao Kim Keat Hill 2 Street Name after Pioneers
In Hill 2, now forever scarred by the 8 lane highway, the tomb of Mrs. Choa Joon Hean ( nee Cheong Swat Leh ) is a unique tomb which is guarded or flanked by a pair of angels which looks like angels you would likely find in a Christian Cemetery rather than a Chinese one. Both husband and wife are buried side by side. The name Choa Joon Hean may not ring a bell to everyone, but the name Kim Keat might. Do read on if you are keen to find out more.

Choa Kim Keat started as a salesman to Lim Tiang Wah & Sons and after the formation of the Straits Trading Co. Ltd, he was the company tin salesman, a position he held till his death on January 5,1907 at the age of 48. He also managed the large rice business of Kim Ching & Co and married a daughter of Mr. Tan Kim Ching ( Miss Tan Hoon Neo). He was the owner of the residence called "Fairyland" in Pasir Panjang and was a well known lover of orchids and rare plants, having won many prizes. When he passed away, his cortege left Neil Road and proceeded to the Alexandra Cemetery. 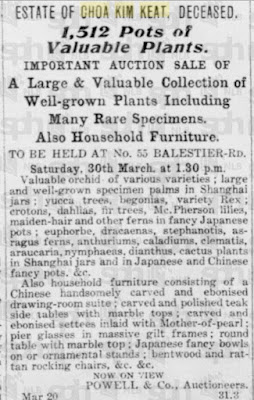 Son: Eric Choa Watt Chiang (March 26 , 1916 - November 7, 2009)
Eric Choa Watt Chiang was the eldest son of  Mr and Mrs. Choa Joon Hean, He had his early education at Outram School and at Raffles Institution. He graduated with a law degree from Cambridge University and became an accomplished Chancery Lawyer. He was married to Hoo Yan Meng (grand-daughter of Hoo Ah Kay also known as Whampoa ) and they have three children Victor, Adrienne and Dennise. He passed at the age of 93 on the November 7, 2009 leaving his widow and children to mourn his loss.

Daughter: Choa Kim Neo (Nancy)
Nancy Choa Kim Neo got engaged to Mr. Wong Yam Hin, second son of Mr and Mrs Wong Yoon Yean of Malacca in 1939 but eventually was broken by mutual consent in a notice published in the Straits Times in 1940.  (I have no further insight on what happened to her)

Seabreeze Lodge, the villa built by Choa Kim Keat was one of a number of homes he owned including the "Fairyland" in Pasir Panjang and 56-9 Neil Road (later 149 Neil Road). Seabreeze Lodge was in the news in 2011, when the then owner, Victor Choa (son of Eric Choa Watt Chiang) sold the villa for $104 million to developer Far East Organization. One of the nugget shared by Victor Choa was that Sea Breeze lodge was occupied by Japanese officers during World War II.

Mr and Mrs Choa Joon Hean are buried in Hill 2, in front of Lee Kim Soo.