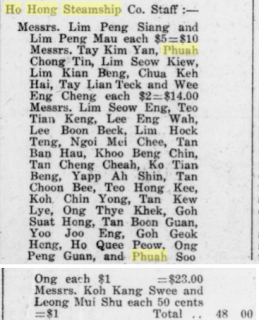 Phuah Chong Tin passed away at the age of 50 on May 6, 1924 at his residence in 537, East Coast Road. He is buried in Bukit Brown in a beautiful triple tomb on top of Hill 1 Division B that is regularly maintained even till today.

Mother: Seah Watt Neo
Seah Watt Neo passed away at the age of 72 at No. 4 Peck Seah Street on November 6, 1923. She is the mother of Phuah Chong Tin and Phuah Chong Wah. Funeral took place in Alexandra Road. She is survived by 2 sons, 11 grandchildren and 3 great grandchildren.

Brother: Phuah Chong Wah
Phuah Chong Wah passed away on December 13, 1935 at No 572 Geylang Road (opposite lorong 31). He is survived by his widow, 1 son ( Phuah Cheng Hoe) and 1 daughter. Phuah Chong Wah is buried in Bukit Brown.
Son: Phuah Sian Kee
Phuah Sian Kee passed away peacefully on August 18, 1941 at No 22. Sturrock Road at the age of 46. He is survived by his wife (Madam Chia Kim Geok), a son ( Phuah Swee Lian ) and a daughter (Phuah Chye Bee). He is buried in Bukit Brown.
Son: Phuah Sian Keng
In 1921, Phuah Sian Keng was the President of the United Chinese Musical Club. In an interview in 1959, Phuah Sian Keng was 59 years and to be a father of 6 children. He was in 1959 a civil servant, special grade clerk who will retire in November 1959. He was selected among 22 people to meet Prince Phillip who was visiting the Naval Base. From what i gather from the article, Phuah Sian Keng was likely to be one of the first Asian employee to join the naval base when its construction began in 1924. 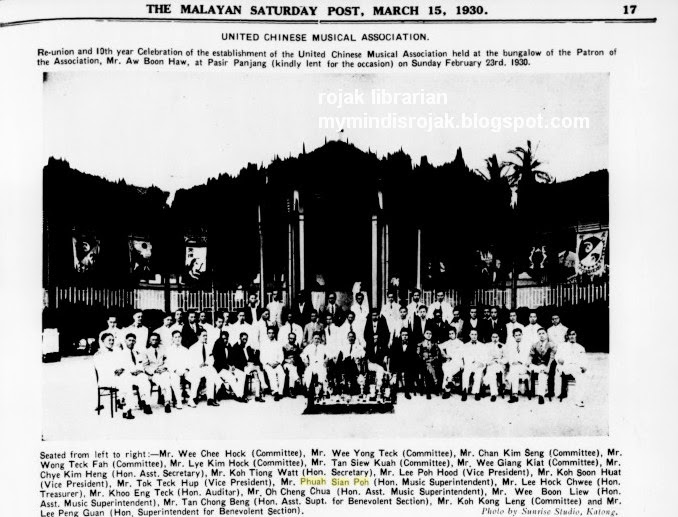 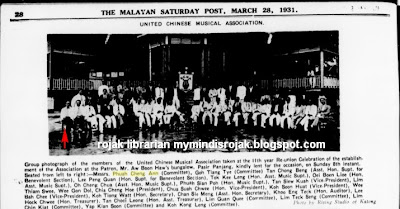