February 24, 2013 Bukit Brown Early Entertainment Family - Ong Sam Leong Hill 3 sikh guard Street Name after Pioneers
Mr Ong Boon Tat (son of Mr Ong Sam Leong) was born in Singapore in 1888. He studied in Raffles Institution and won a Guthrie Scholarship. He was a Justice of Peace and Municipal Commissioner for 5 years. Mr Ong Boon Tat was the managing director of of New World Limited (New World Park). He was a Director at Overseas Assurance Corporation (during the time where the Chairman was Mr Lim Nee Soon).

In the early 1900's, a young Ong Boon Tat stepped into the offices of the Straits Times to apply for the position of shorthand reporter and did a good job of it during a time where the entire editorial team is made of Europeans. However his family business activities came calling and he had to leave. He however never lost interest and later in life became the director of the Malayan Tribune Press Ltd. As the head of the firm Ong Sam Leong and Co, who were the contractors for Christmas Island, he had to travel to Christmas Island to deal with workers unrest / riot there in 1919. He also expanded the company to Penang. Ong Boon Tat was a well travelled man and a well known socialite.

Ong's and New World
Established in 1923 by Ong Boon Tat and Ong Peng Hock, the New World was the pioneer amusement park in Singapore. It was the inspiration of their mother, Mrs Ong Sam Leong and her love for operatic shows that encouraged their son's foray into this business.  New World was also the venue sponsor that supported many of the China Relief Fund activities . The Governer, Sir Cecil Clementi visited New World in 1923 to grace the Empire Shopping Week held at its premises.
In 1938, its air-conditioned cabaret opened with great fan fair by the President of the Municipal Commissioners, Mr. W. Bartley and witnessed by 1,500 guest. The air-con 4,400 sq ft sprung dance floor was built at the cost of $290,000. It was the largest of its kind east of the Suez. Other activities in New World included international boxing tournaments, "ronggeng" competitions and beauty contest. "Talkies" theatres entertained many and Chinese and Malay operas too.

The air-con cabaret was shelled and bombed by the Japanese and a new one rebuilt in 1947 by Ong Peng Hock and Shaw Ltd at a cost of $350,000.

In 1963, Shaw Brothers took over, acquiring majority stake. In 1970 they opened a $300,00 Pacific Theatre, a air-conditioned 700 seater that screen's Mandarin Films. In 1987, it was bought over by City developments for $35 million and redeveloped into residential property (City Square residences).

Death
On July 5 1941, while Ong Boon Tat and his friends were inspecting a sea pavilion that was being constructed at his new house in Pulau Dama Laut, it collapsed and buried them. Mr Ong Boon Tat survived but was in shock, while his friend, Mr Low Kim Swee died instantly. Ong Boon Tat died on July 8, 1941 at the General Hospital, never recovering from his injuries and shock plus the fact that he had health problem's of the heart for the past few years. He leaves behind two widows, 4 sons (Ong Tiang Wee, Ong Tiang Guan, Ong Tiang Choon and Ong Tiang Hin ) and 3 daughters (Ong Lim Neo, Ong Kwai Kheng, Ong Kwai Yong), 2 son-in-laws (Tan Gim Yang, Liu Yoke Lin). New World Park and Cabaret was closed as a mark of respect. The family also requested that wreaths need not be send but rather be donated to the War Fund or China Relief Fund.

Son: Ong Tiang Wee ( T.W. Ong )
His eldest son, Ong Tiang Wee ( T.W. Ong ) was also a Municipal Commissioner. In 1932, he married Miss Getrude Chung Tiam Fook (the only daughter of Mr and Mrs William Chung Tiam Fook, a diamond merchant in British Guiana, South America. Getrude herself was awarded the M.B.E and a Certificate of Honor for her contributions in the Blood Transfusion Service.


Son: Ong Tiang Guan, Wallie
Ong Tiang Guan, Wallie married Miss Chua Hock Tay, Phyllis (the eldest daughter of Mr and Mrs Chua Cheng Hock of Malacca). Chua Cheng Hock was one of the directors in Cycle and Carriage and is also buried in Bukit Brown. The wedding took place at the brides home at 21 Scotts Road and reception held at New World cabaret where over 1,000 guest attended !


Wife: Madam Oon Chim Neo
Mrs Ong Boon Tat nee Madam Oon Chim Neo is the only daughter of Mr and Mrs Oon Chin Soon. She was one of the earlier batches of chinese ladies to receive western education and graduated top of her class from the Singapore Chinese Girls School. Madam Oon's father,  Mr Oon Chin Soon was the chief cashier at Messrs. Katz Bros. Ltd. (Mr Oon passed away in April 1929 and is buried in Bukit Brown).Madam Oon Chim Neo passed away at the age of 31 on March 12, 1917 at her father's house in 6 Balmoral Road and had a son, Mr Ong Tiang Wee.


Wife: Madam Tham Yim Seong
Mrs Ong Boon Tat nee Tham Yim Seong passed away at the age of 83 on August 30, 1978, leaving behind a son, Ong Tiang Choon and other sons and daughters. The cortege left from 221 Tembeling Road for Mount Vernon. 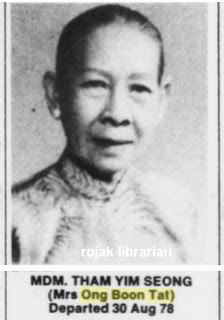