January 18, 2017 Died Young Greater Bukit Brown kranji war memorial Lao Sua war
I wrote back in 2014, an article titled Volunteer Soldiers Buried in Bukit Brown - a journey of rediscovery . It was about the Chinese volunteers that were either buried or once buried in Bukit Brown. In the article, i also mentioned in passing about a Private Ho Siong Tong whose empty tomb lays in Kranji War Memorial and tomb inscription mentions that he was buried at that time in Wayang Satu Chinese Cemetery but whose grave is now lost. The "missing" volunteer soldier is no longer missing as his tomb was rediscovered by Raymond Goh recently behind the small jungle off Trevose Place. Raymond Goh brought me to the location of the tomb of Private Ho Siong Tong after i saw a post on his amazing discovery.

From the in-situ tomb, we know that Private Ho Siong Tong was 22 years of age when he passed away on active duty and that he died on 12th June 1915 and finally the tomb was erected by the Officers, N.C.O's and fellowmen of the Singapore Volunteer Infantry, Chinese Company.


From Sir Song Ong Siang's One hundred years' history of the Chinese in Singapore, we get a glimpse about what happened to Private Ho Siong Tong.

Military honours was accorded to Pte. Ho Siong Tong ( a son of the late Ho Yiang Moh) at his funeral on 14th June 1915. He was one of the Guard at Kallang Reservoir and on 11th June 1915 was reported missing. His cap and boots were discovered at the edge of the reservoir and his body was found floating 2 days later. He was buried in Wayang Satu Cemetery at the expense of his sister, Mrs Tan Moeng Tho and fellow Volunteers raised a tombstone over his grave".

Finding out about Ho Siong Tong hit a blank wall. Other than the fact he died while on guard duty, i know very little about him ( whether he was married and had children). However it was fortunate that two names were mentioned, his father; Ho Yiang Moh and his sister; Mrs Tan Moeng Tho. It is his sister, that gave me an interesting insight on woman during that time. From my research and mapping of names and rechecking again, i found out that she was a lady who was married 3 times successively (something rare at that time and in my opinion also rare today).

Ho Yiang Moh was for many years a shroff of the Chartered Bank. He was also a councillor of the Celestial Reasoning Association, (a society that encourages the advancement of literature by both the improvement of English and Chinese literature and regular debates)

In the article above, it was mention that, Private Ho Siong Tong had a sister, Mrs. Tan Moeng Tho. So what's her maiden name ?  It is from the Newspaper archive resources, that i got to find also more about his sister, a Mrs. Tan Moeng Tho (nee Ho Sok Choo Neo). Further research, i found out that in March 7, 1909 , there was an article of  Mr Tan Meong Tho marrying Ho Shiok Chui Neo (widow of Mr. Wee Siang Tat ). 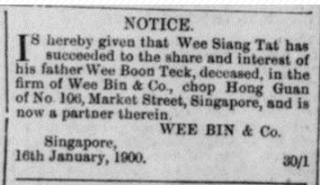 Ho Sok Choo Neo was in short successively the wife of the late Mr. Wee Siang Tat and the late Mr. Tan Meong Tho and finally Mr. Wee Siak Leng in 1928 after finding an article of a quiet ceremony that took place at 28 Killiney Road when Wee Siak Leng (son of Mr and Mrs Wee Nam Huat) married Ho Sok Choo Neo (daughter of the late Mr and Mrs Ho Yang Moh and widow of the late Tan Mong Thoh)
Ho Sok Choo Neo passed away on 18 September 1931 at the age of 57 at 114 Killiney Road leaving behind 4 sons, Tan Jat Min, William Tan, Tan Tat Min alias Edward Tan and Tan Kong Min alias Farrer Tan and 2 daughters, Tan Swee Eng alias Wee Boolat and Tan Puteh and one son-in-law. Chua Tian Chong. Burial took place at Buona Vista Cemetery. Madam Ho Sok Choo Neo held considerable wealth and a snap shot of this can be seen from an advertisement article in 1951 (20 years after her passing, putting up for auction properties under her estate).

For now, Private Ho Siong Tong's tomb in this location remains safe and no longer lost.. until more development happens.