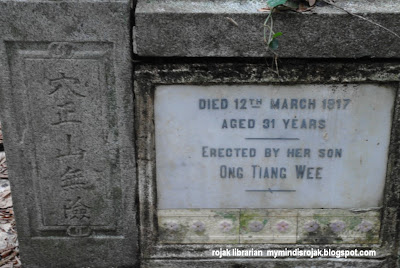 After Madam Oon Chim Neo passed away at the age of 31 on March 12, 1917 at her father's house in 6 Balmoral Road , a beautiful and large tomb was erected  by her son, Mr Ong Tiang Wee.

Ong Tiang Wee
Mr Ong Tiang Wee (T.W. Ong), M.A. was a prominent lawyer both in Singapore and Malaya. Ong Tiang Wee won the Guthrie Scholarship in Raffles Institution and went on to study in Magdalene College, Cambridge and called to Bar after reading law in Middle Temple, London. In 1932, he married Miss Getrude Chung Tiam Fook (the only daughter of Mr and Mrs William Chung Tiam Fook, a diamond merchant in British Guiana, South America. Getrude herself was awarded the M.B.E and a Certificate of Honor for her contributions in the Blood Transfusion Service. In 1939, Mr Ong Tiang Wee received military training with the 1st Battalion of the Royal Scot of England. He was an officer in the British Army when Singapore fell and was arrested and imprisoned by the Japanese Kempeitai.

Ong Tiang Wee was a Municipal Commissioner from 1939 -1948. He was also in Overseas Assurance, the Malay Tribune Press Ltd and New World Limited. Ong Tiang Wee was a partner in the firm called Messers. Chan, Laycock and Ong. (This was the firm that Lee Kuan Yew joined after passing Bar and returning to practice in Singapore in 1950) and Honorary Life President of the Peranakan Association.


Bukit Rose and novel "Tanamera"
Bukit Rose at 259 Bukit Timah Road, the family home of the Ong's was sold by its last owner, Ong Tiang Wee in 1981. The house which stood on a 25,914 sq m land was bought by City Development for a reported $27.27 million. In its place was a 114 condominium estate called Casa Rosita. The author of bestselling book Tanamera, Noel Barber was said to have gotten his inspiration after a visit to Bukit Rose in 1938 for a party, but was disappointed to find out the house he wanted to use for the movie version of his book was long gone 40 years later. Barber was an editor for the Malayan Tribune in the 1930's, during the time where Ong Boon Tat was its director.

Bukit Brown connection
Ong Boon Tat, Ong Sam Leong, Oon Chin Soon are buried in Bukit Brown. Madam Oon Chim Neo's tomb is technically located in the Seh Ong cemetery which is across the gates of Bukit Brown, along Kheam Hock road. Her peg number is no 77 which means her tomb is affected by the 8 lane highway.