September 16, 2013 Block 3 Div A Bukit Brown Hill 3 Lao Sua tomb mason
Mr. Chua Swa Chwee (蔡山水 or 蔡沙水) was a fishing merchant, commission agents and fishing stake owners of various companies at Clyde Terrace Market under the following company names, Chop Sin Guan Huat, Chop Guan Hin, Chop Guan Seng and Chop Guan Kee. In a 1928 report of the Commission on Profiteering, i gained insight into Chua Swa Chwee expanse of  business. He handled about $20,000 worth of fish per month in the 1920's and has been in the fishing business for the past 22 years. Other than being a successful businessman, Chua Swa Chwee was very active socially and involve in various community groups:

In March 20, 1940 , (less than 3 months before his death) a notice to revoke the power of attorney of his eldest son, Chua Cheng Kang and remove his authority or power to manage the businesses of his father.

Father of Chua Swa Chwee
Chua Swa Chwee father's tomb is located in Lao Sua and is beautifully engraved tomb with one panel featuring monkey god. The date of death mentioned in the tomb was April 12, 1918. In an advertisement article in Malaya Tribune dated 11 October 1919, the tomb mason, Chop Chuan Hiap Seng put up an advertisement to thank Chua Swa Chwee for a generous tip of $800 (a princely sum in 1919) for the construction of the tomb you see below. 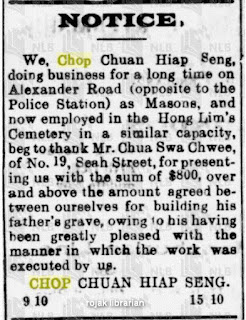