September 03, 2013 Block 2 Division C Bukit Brown Family - Cheong Koon Seng Hill 2 Street Name after Pioneers
Cheong Koong Seng, J.P., M.C. was born in 1880 and educated in Anglo Chinese School. Cheong Koon Seng,  is the proprietor of Messrs. Cheong Koon Seng & Co. and holds the honor of being one of the best known pioneer local auctioneers and estate agents in Singapore. He was trained under the auctioneering firm Powell & Co for 20 years and was also the manager of Commercial Rubber Co. Ltd from 1918-1920, before striking it out on his own in January 1920, based initially at 80 Kling Street under the style of Messrs Cheong Koon Seng and Co. His partner was Ong Hong Guan who died 5 years later and Cheong Koon Seng's eldest son took over as partner.

One of two son's of Mr Cheong Ann Bee, a wealthy first generation Straits born merchant from Malacca, Cheong Koon Seng and his brother Cheong Koon Hong were responsible for the building of Theatre Royal in North Bridge Road (former Blanco Court, now Raffles Hospital) and are the proprietors of the Star Opera Co. which performs opera every night (except Thursday's) in the Malay language. Performances include Shakespearean pieces such as Hamlet, stories such as Arabian Nights, Ali Baba to chinese classics such as Sam-pek Eng-Tai.

Mr Cheong Koon Seng contributed to the community and played a very active role in various colonial and association responsibilities. This included:

Cheong Koon Seng passed away peacefully at his residence, "Valley-side" in No 299 River Valley Road at 9 am on March 20, 1934 at the age of 55. He was not in good health for the last few months and 16 days prior to his passing, he was operated upon at General Hospital. He showed initial signs of recovery but then had a relapsed. He is survived by his wife (Chia Siew Tin), three sons ( Cheong Hock Chye, Cheong Hock Guan and Cheong Hock Leng), 4 daughters (Cheong Keong Poh,Cheong Keong Tee, Cheong Keong Tuan, Cheong Keong Hee, Cheong Keong Aik, Cheong Keong Heok)  and 4 grandchildren.

The funeral was well attended and 5 lorries were needed to ferry over 500 wreaths ! He is buried together with his mother and his wife (Madam Chia Siew Tin) 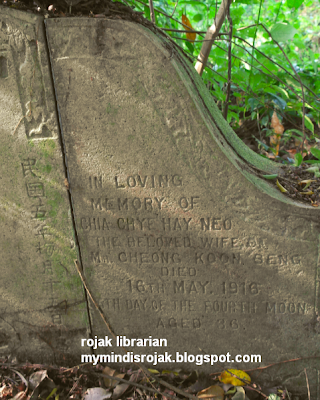 Father: Cheong Ann Bee
Cheong Ann Bee was born in Malacca in 1833 and came to Singapore when he was 10 years old. He spoke no English as he attended Chinese school as a boy but nevertheless work in European firms such as Messrs. Dare & Co. and W. Mansfield & Co. He went on to venture into shipchandlery business  together with Tan Eng Siew under the name Ann-Bee, Eng-Siew & Co. In 1878, they parted ways and Cheong Ann Bee eventually partner Syed Mohamed Alsagoff and Lim Eng Keng in the firm Ann Bee & Co until it was eventually wound up in 1898. Cheong Ann Bee was known for his charitable disposition in providing eye salve (ointment) to those in need, especially coolies.
Cheong Ann Bee died on March 9, 1896.


Brother: Cheong Koon Hong
Mr. Cheong Koon Hong passed away at the age of 81 in October 1964. He is survived by a widow, 4 sons ( Cheong Hock Quee, Cheong Hock Siew, Cheong Hock Lock, 6 daughters, 5 daughter-in-laws, six son-in-laws, many grandchildren. Funeral service was held at Church of Holy Family, Katong.
Mrs Cheong Koon Hong (nee Madam Yeo Kim Yan ) passed away peacefully at her residence in no 75 Koon Seng Road on March 8, 1941 at 9:30 pm. She is survived by her husband,  5 sons, 6 daughters, 1 daughter-in-law, 2 grandsons and 2 granddaughter. She is buried in Bukit Brown.

Today there is a house name after Cheong Koon Seng in Anglo-Chinese School and a road called Koon Seng Road in the east of Singapore. It was formerly known as Lorong E East Coast Road before it was renamed in 1934.Finally, the company he founded is still around. It is called CKS Property Consultants Pte Ltd.