June 14, 2015
By the time i got wind of Pied Fantail (Rhipidura javanica) chicks being photographed, they were already juveniles getting ready to fly and way oversized for the nest that it was hatched on. Anyways this photo log post was long overdue as well.

From Singapore Bird Group's post, i got to find out at they were about 11-13 days old and constantly being fed by it parents. I saw moths and butterflies as part of its menu.

The rare photos feature a row of shop houses in 1941 and this photos are from  a batch of photos by Harrison Forman. Fortunately with some cross referencing, we are able to identify this are shophouses located at North Bridge Road. To be specific, the current Raffles Hotel has now replaced this buildings today.    Hiruma Shokai is located at 324 North Bridge Road Fortunately, i am able to see some of the banners and able to identify the following companies/merchants  (from furthest left to nearest): Jubilee Theatre  - 340 North Bridge Road   M. Yamamoto Dental Surgery  - 338 North Bridge Road Nanya Shoyko Sakura & Co Maru A Co. Mitsuboshi Electric Co, Wah Heng & Co (Bakery) Hiruma Shokai - 324 North Bridge Road   source: University of Wisconsin-Milwaukee Libraries source: University of Wisconsin-Milwaukee Libraries Hiruma Shokai The shop sells crocodile and lizard skins, bags, leather goods and Japanese goods.  The buildings are all long gone and in its place is where Raffles

It was a simple tomb in Lao Sua (Heng San Teng), but the words of MAK KANAGA, died 21 December 1915 that caught our eye and made this tomb very unique. I was told that she either married a Lim or was adopted into the Lim family. The Lim family ancestry village listed on the tomb is Kinmen.  So who is Mak Kanaga ? She is very likely a non-chinese lady. The word Mak translates from Malay to mean the honorific title of "Aunt". Kanaga could be a Malay, Tamil, Japanese, etc lady, but this will remain a mystery for now.

Wee Lie Neo passed away at the age of 54 on 1 September 1925. From her tomb the name of her children; Son: Yap Kwee Bock Grandson: Yap Yow Keng Location of tomb  Wee Lie Neo or in the burial registrar, Wee Lye Neo is buried in Hill 1 Division G, plot 409

The wartime tomb of Mr. Ong Cheng Eng is a simple one but yet rich in history. Written all in English, the calendar listed also is unique for its time period as it follows the Japanese Koki Calendar. Mr. Oh Cheng Eng passed away at the age of 43 on  6 September 2602 (1942). There is one son listed on the tomb, Oh Chwee Hock.  During the same time period (post-1945), there is a famous waterpolo player by the name of Oh Chwee Hock, but i don't have enough information to confirmed whether he is indeed the son of Mr. Oh Cheng Eng.  Location of tomb Mr. Oh Cheng Eng is buried in Block I Section C, plot P43. 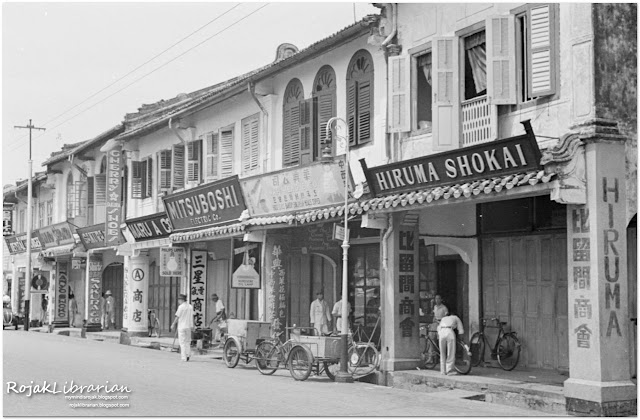 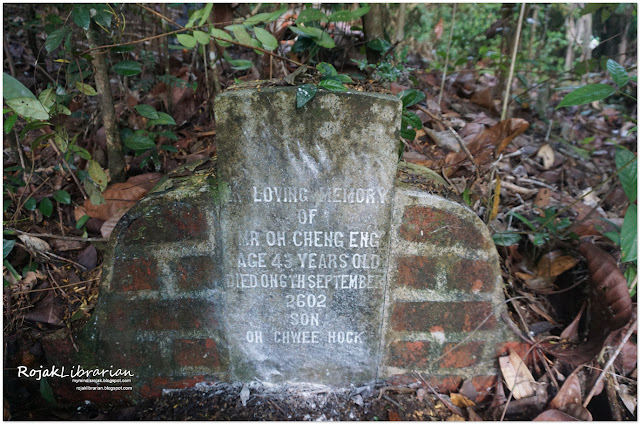 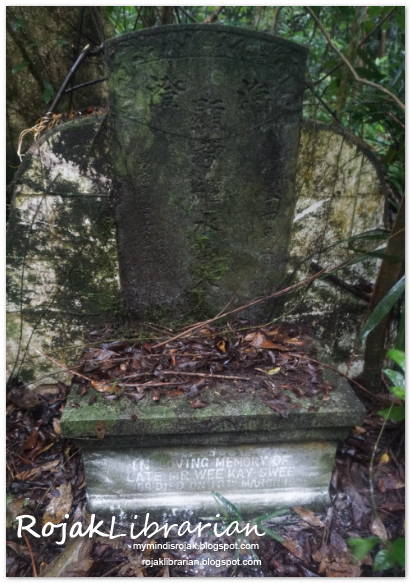