Newspaper mentions of the Rojak Librarian (2017)

August 09, 2017
The feature on the front page of Tabla! is on the "Sikh Guards of Bukit Brown -The presence of their statues among the ornate tombs of the Chinese is testimony to a shared heritage frozen in time". The article is by Madam Vandana Aggarwal who was inspired to write after seeing this statutes while participating in the free tours organised by the volunteer group All Things Bukit Brown. To keep the story short, i met up with her and gave her and Rakesh Kumar a personal tour of of some this statues. The article was eventually published on Tabla! on August 4, 2017 on the main page and continued on pages 6 to 11.


The article was also picked up by two other papers, The online version of  Newpaper (Singapore) and The Tribune, (online newspaper from India).

About Tabla!
tabla! is aimed at the Indian diaspora, with 30,000 copies being given out free each Friday. The paper is named after the popular two-piece Indian percussion instrument and is published by the Tamil daily newspaper Tamil Murasu, a paper under the Singapore Press Holdings. 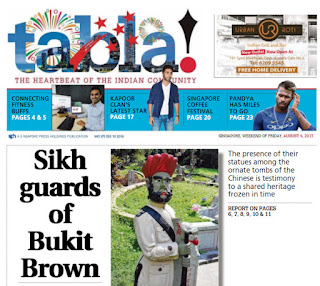 Sentinels of Singapore
Among the elaborate funerary paraphernalia at the Bukit Brown cemetery are statues of Sikhs, standing guard at some Chinese graves
By Vandana Aggarwal

In the heart of Singapore lies Bukit Brown, a cemetery home to more than one lakh Chinese graves. The area is overgrown, and at first glance, it looks like any old Chinese cemetery with its horseshoe-shaped graves, elaborate funerary paraphernalia and tomb guards. Look again, and you will notice that statues of Sikhs stand guard at some of the tombs!

The Sikhs, like other Indian communities, had made their presence felt in Singapore quite early. However, it was after the Anglo-Sikh wars of the 19th century that the British sat up and took notice of the military capabilities and bravery of the Sikhs. The first Sikh police contingent arrived in Singapore in 1881. A British recruitment handbook referred to them as being “fairly incorruptible”, and “good policemen.”

Many of them took up private employment after completing their tenure with the government. Impressed by their masculine personality and bravery, the prosperous Chinese businessmen started employing Sikhs at their houses and businesses. Soon, they became an important part of their lives thanks to their honesty, hard work and loyalty.

They are locally referred to as ‘jagas’ (Malay for guards), a word that undoubtedly owes its origins to the Punjabi word ‘jaga’ or ‘staying awake’.

Old timers in Singapore nostalgically remember the kind-hearted, burly Sikh guards sitting in front of banks and offices on their charpoys.

The Sikhs built a formidable reputation of being reliable protectors of life and property. The Chinese, who strongly believed in an afterlife, at some point decided that it would be a good idea to have the Sikh guards protecting them after their deaths as well.

The Bukit Brown cemetery was established in 1922. So far nearly 30 pairs of Sikh guards have been discovered there. These range from around 3 feet to 5 feet 8 inches in height.

These stand in pairs, erect, holding guns by their sides and very often carry a kirpan too. Every curl of their beard, fold of their turban and wrinkle in their shirt is carefully carved out giving them a realistic, life-like appearance.

Some of the guards look older; they have a slight slouch, a visible paunch and gentleness in their eyes. Others have an imposing appearance, with piercing eyes and are smartly dressed with carefully tied turbans, ammunition belts and police boots.

There is no evidence that these beautiful statues were made in Singapore. These were probably imported from China with the rest of the tomb decorations. It is a mystery how the carvers were able to carve the likeness of the guards. Either these were sent sketches to help them or they modelled them after the Sikh policemen who had already made their way to Shanghai and other parts of China as policemen.

Traditional Chinese medicine physician Chew Geok Long’s tomb, with its accompanying Sikh guards, is well maintained and the guards are brightly painted. These guards are dressed in military uniforms, and apart from the gun, also have a majestic ceremonial sword at their waist.
These sentinels of a lost world replace the Chinese door gods, who guarded the tombs and ward off evil spirits. A few guards have ‘foo dogs’ — mythical Chinese guard dogs — standing beside them showcasing an interesting amalgamation of Chinese and Indian cultures. The features of some are distinctly Chinese!

Sadly Bukit Brown was largely forgotten for decades having been closed in 1973. Nature then took over the graves, enveloping anything and everything in its embrace. In 2012, the government of Singapore announced plans to redevelop Bukit Brown into a housing estate and build a road through it. That was when Singaporeans, once again, took notice of this cultural heritage.

The ‘brownies’ is a group of dedicated volunteers, who have worked tirelessly to make more people aware of the rich heritage at Bukit Brown. Peter Pak has discovered and extensively photographed and recorded these guards for the past six years. In his blog, “Rojak Librarian,” he states, “these Sikh guards are representative of a unique period of time when Singapore was a colony of the invincible British Empire.”

When news about the presence of these statues came to public notice, Ishvinder Singh (30), a third-generation Sikh in Singapore, was taken by surprise. As a practicing Sikh, Bukit Brown meant a lot to him as he was at that time grappling with a desire to know more about his roots.

He, along with researcher Vithya Subramaniam, decided to work on a Sikh heritage trail app. Vithya focused on research and content and Singh on technology. The app was launched in 2015. His aim was twofold — to make the Sikh youth proud of being Sikhs and to raise an awareness of their shared immigrant heritage.

At least one pair of Sikh guards, along with the tomb, which they were guarding, has been removed to make way for the proposed road. It is, however, being preserved as an important part of Singapore’s heritage by the National Heritage Board.

Many of these statues are not easy to find and are hidden in the dense undergrowth. Closer inspection has shown that not all guards are Sikhs as some do not have facial hair.
They have been exposed to the elements for decades and due to a lack of maintenance, many of them have been knocked down at an angle or have trees enveloping them.

Human and nature notwithstanding, these Sikh guards are not giving up the job that was assigned to them and continue to stand tall, reminding us of how our forefathers travelled to faraway places and made a name and place for themselves in different parts of the world.
Bukit Brown newspaper mentions