Together to the grave - a doctor and his mother (Bukit Brown)

March 17, 2012 Block 3 Div B Bukit Brown Doctor Epitaph
In one of my trips to Bukit Brown, Block 3 Division B, plot 450, i came across a cluster of family graves, with a fence and gate. The way the plaques or memorial stones were laid out got me curious and what i uncovered was a tragic story.

Double tragedy
A family dinner for the Tan's at a house by the sea in No 135/136 Pasir Panjang Road on 7 February 1968, ended on a sour note, when Madam Siew  Lin Neo, 72 years of age suddenly collapsed after dinner. Desperately trying to revive Madam Siew was her eldest son Dr. Essel Tan Sin Lian, 47. He did not manage to save his mother. Grief stricken, he was heard repeating "It's no use being a medical man, if i can't even revive my own mother". He took the death of her mother very personally, so much so that he blamed himself and he took it as a personal failure. He also subsequently collapsed and was brought to the General Hospital where he died at 3:45 am, 8 hours after the death of his mother on 8 February 1968. Both laid in coffins side by side and were later interned in the family plot of Dr Essel Tan Sin Lia's father, Mr Tan Hock Ann who died in 1942.


Dr. Essel Tan Sin Lian was the deputy Director and district surgeon of the St. John Ambulance Association. He was the last graduating batch from the King Edward VII College of Medicine in 1949 before the college became University of Malaya.


A mystery of the 3 missing tomb

As you enter the family plot you will notice 3 memorial plagues supported by steel "pegs" and that's about it. Madam Seow Lin Neo and Dr. Essel Tan are there close-by each other and from the death dates you can see they died 1 day apart. The third one belongs to a Mrs Tan Kim Leong (Mdm Ong Geng Neo, died in 1944, age 81). Mrs. Tan Kim Leong (Madam Ong Geng Neo) passed away on November 2604 (1944) at No. 3 Spottiswoode Park Road. She is survived by one daughter-in-law (Mrs. Tan Hock Ann), 1 daughter, 1 son-in-law, 19 grandchildren and 19 great grandchildren and 2 great great grandchildren. But why no tombs for the 3 of them? A mystery indeed waiting to be uncovered. 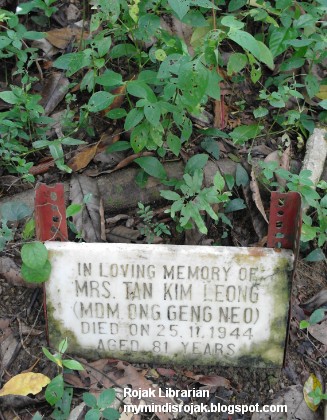