December 02, 2014 Alexandra Cemetery Block 3 Div A Bukit Brown Hill 3
Tay Geok Teat was born in Malacca in 1832. His father, Tay Song Quee , a native of Cheang-chew came down from China and settled down in Malacca in the early 1800's. In 1863, the firm Geok Teat & Co. was established in Battery Road as Warehousemen and Commission Agents. The partners are Tay Geok Teat, Tan Kim Tian, Tan Sam Chie and Chia Ann Siang. By 1868, he was sole proprietor of Geok Teat & Co. Tay Geok Teat  was in the Chinese Advisory Board and was a founding member of the Straits Settlements Association in 1888. He also served as Municipal Commissioner in 1892 for one year (after being nominated by Tan Jiak Kim and seconded by Lee Cheng Yean) before he passed away in 1893.

Tay Geok Teat traveled with Lee Cheang Yean (father of Lee Choon Guan) around Europe in 1883 especially the manufacturing towns, some of them included Birmingham and Glasgow. He also travelled extensively to China and paid a visit to Japan. He was fond of music and his favourite instrument was violin. After he returned from Europe he started a band composing of his family members and his grandchildren.
Death
Tay Geok Teat passed away on April 21, 1893 and was buried in Alexandra Cemetery before reinternment in Bukit Brown after Alexandra was redeveloped. His wife passed away in October 1892 and it was said that after the death of his wife, Tay Geok Teat was said to have lost interest in public affairs. After his eventual death in 1893, he is survived by his only son, Tay Kim Tee and 10 grandchildren.
Son: Tay Kim Tee
In 1871, he took his son, Tay Kim Tee into the business and after Tay Geok Teat's death on April 21, 1893 , Tay Kim Tee took over Geok Teat & Co. and run it until 1906 when it was eventually closed down due to administrative action by his own sons suing him for large sums of money representing the residual property of the estate of the late Tay Geok Tat. He passed away on June 9, 1906. The remains left from No 78 Amoy Street to their family burial ground in Alexandra Road. Among his sons left behind were, Tay Boon Teck and G.B. Taye. (George Bennet Taye alias Tay Boon Guan).
Son: Tay Boon Teck

Tay Boon Teck of Singapore Electric Tramways Ltd passed away at the age of 45 on April 29, 1922 at his residence in No. 371 Alexandra Road. He left behind 1 wife and 5 children.

Will disputes
When Tay Geok Teat passed away, his will named his wife and son as the main beneficiary and the grandchildren as the secondary beneficiary. Since Tay Geok Teat's wife passed away before him, Tay Kim Tee applied for probate of the will. However, a person by the name of Leong Ah Tin, asserted that his 13 year old daughter "married" Tay Geok Teat, 15 days before his death and therefore the will should be void as a result of a subsequent marriage. The claim was eventually discharged. 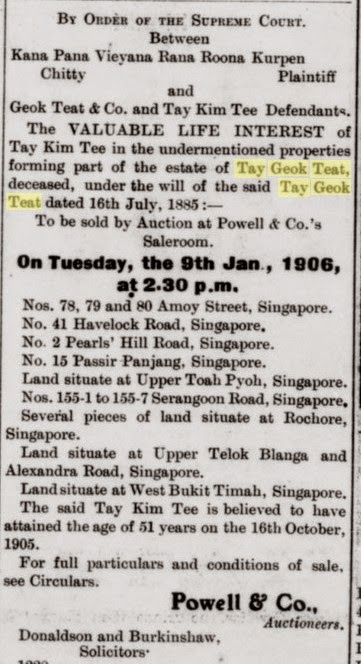