July 13, 2016 Family - Chua Soon Leong Greater Bukit Brown Lao Sua
One of the most beautiful engraved and decorated pair of tombs in Lao Sua are the tomb's of Chua Soon Leong (died 2nd September 1920) and his wife Madam Tan Hiang Guat Neo (died July 10, 1910 age 35). Chua Soon Leong was a Comprador of Messrs. United Engineers. He was also the President of the Tiang Ho Kok Association and it was in one of the meetings held in July 1915, a motion was passed to invest £100 (out of the association's fund of £1000) on the British National War Loan.

Chua Soon Leong passed away at the age of 48 on 2nd September 1920 at his residence in No. 4 Seok Wee Road. In the article, it mentions that he is interned at Eng San Teng, Bukit Timah.

Chua Soon Leong was mentioned to be an auditor in rotation for the Family Benefit Society in February 1916. This society founded in 1913 by its founder Mr. Geo Ritchie of Messrs. Whiteaway, Laidlaw and Co, grew from 33 members with a capital of $60 to 500 members and a capital of nearly $5000 (in 1915). The made up of members include Europeans, Eurasians, Chinese and Indians. It was non-sectarian, non-denominational -advocating no religious order and no distinction to race, class and creed. Its objective was to bring comfort and relief to families when the main bread winner is sick or unable to work or has passed on. It does this by getting its members to save money every month into this mutual thrift fund.

One of the questions raised (and this was by Chua Soon Leong ) was who will look after the families of the ones who have gone to served. It was thus Dr. Lim Boon Keng standing on behalf of the Straits Chinese British Association who gave a moving speech on the ways the Chinese can actively contribute. 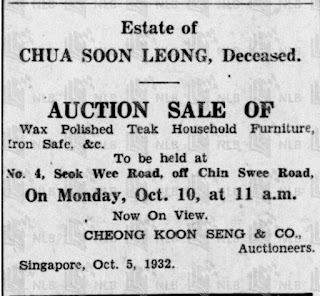 Daughter: Chua Seng Neo / Mrs Lim Han Hoe  (4th June 1897-13th April 1978)
Chua Seng Neo married Sir Dr Lim Han Hoe, CBE, JP (27 April 1894 – 23 March 1983). He was a prominent Straits Chinese and doctor of that time. Born in Singapore in April 27,1894. He is the second son of Mr. and Mrs Lim Cheng Sah, a landowner. Lim Han Hoe studied in St.Andrews, Raffles Institution and later King Edward VII College of Medicine. He went to Scotland to join the Royal College of Surgeons and Physicans and later Edinburgh University. He practiced at St. Andrew's Hospital, Scotland 1918. Returning to Singapore in 1919, he took up a job as ship surgeon with China Mutal Steamship Company and later as a General Practice for Amoy Dispensary. In 1940, he was appointed as a member of the Executive Council before moving up to the Legislative council. In 1941, he made it the King's birthday honors and was made a Commander of the Order of the British Empire. During the Japanese Occupation he was arrested and sentenced to seven years imprisonment at Outram Prison for the crime of listening to Allied Broadcast. Fortunately he survived it.

Son: Chua Eng Sim
A tomb behind the Chua Soon Leong cluster belongs to an infant by the name of Chua Eng Sim who was listed to have passed away at the age of 162 days on 10 am, Tuesday, 18th March 1913. The name of his parents are also mentioned at the tomb of the tomb: Chua Soon Leong (father) Koh Geok Chew (mother). 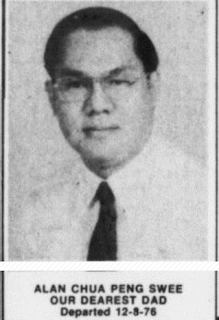 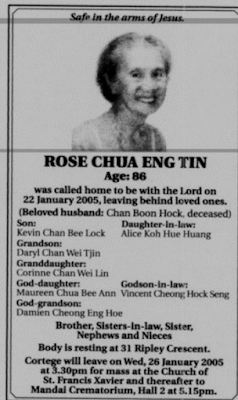 The tombs in Lao Sua or Greater Bukit Brown are part of the future guided walks we plan to do or have already started in the past but to a lesser extend. Lao Sua is another large area of historical significance managed by the Hokkien Huay Kuan but subsequently sold to the Government under the land reclamation act for future development. First established after the old Tiong Bahru Cemetery was full, it was through the efforts of pioneers like Gan Eng Seng, Tan Beng Swee, Chia Ann Siang who donated money to create this cemetery cluster for purpose of burial of their immediate family and also other Chinese of the Hokkien dialect.

The stories are continuing to evolve, so do bear with the possible mistakes (if any) during the writing process of the stories. With more people in the community with better insights, i am sure more can rediscovered and the stories of the long forgotten past remembered again and piece back together bit by bit.