Lee Phan Hock was a Straits born Chinese who owned many properties including villa's at Beting Kusa and one called Sandringham Villa  (13 1/2 mile Changi Road). He was educated in Raffles Institution before being employed in Chip Hock & Co. He was a clerk for the Straits Settlements Police and served under Colonel Dunlop as a clerk and intrepreter in 1881 and retired in 1897. He continue his various business after that and also held shares at Wearne Brothers Limited, Tambalak Rubber Estates Ltd. his generosity to various causes and support of female education was also well know. He was one of the early reformist and cut his queue in 1898. 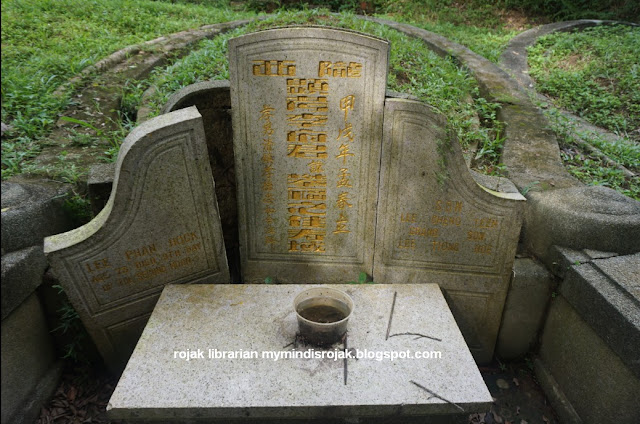 Lee Phan Hock was the President of Beting Kusa Party, City Club and was always generous to open his holiday villa to various associations such as the Merrilads Musical Association, Soon Hoe Kok Association as well as the Australian and New Zealand Association (Nurses) . He was also popular among the local villages in Beting Kusa, regularly organising a land and sea sports as well.

It is from the Merrilads Musical Association Sixth Anniversary Picnic pictures on Malayan Saturday Post, 5th July 1930 we can get a glimpse how Beting Kusa looks like as well as the Sandringham Villa. Beting Kusa today is probably located within the Changi Airport compound.

Lee Phan Hock had many birthday receptions in his villa and was something very well attended by the local and European communities as described in many newspaper articles.

Now it is from here, where the research gets a bit murkier and until i get further confirmation from the descendants of Lee Phan Hock, the precision of this part is something on-going and requires further confirmation. What can be established from the tomb is the name of the son; Lee Cheng Teen and grandson; Lee Tiong Hoe.

Grandfather: Lee Eng Guan
Lee Eng Guan was a physican from China and started his business in the early 1819-1829's in Singapore under chop Hok Ann Tong. Lee Eng Guan married a niece of Tan Che Sang. (Tan Che Sang was the first chinese name mentioned in Charles Burton Buckley's Anecdotal History of Singapore and was a rich merchant)

Father: Lee Boon Lim
Lee Boon Lim was born in Singapore in 1824 and was in the import and export business with Shanghai. He passed away at the age of 31 , leaving the business to Lee Phan Hock who was 11 years at the time.

Son: Lee Cheng Teen
I have trouble pinning down who Lee Cheng Teen was and still have doubts of mistaken identity, but what i have so far is in an article dated 16 September 1960, it mentions that a boy, Lee Tiong Hoe been granted $40,683 in a court ruling in an incident where Lee Tiong Hoe suffered head injuries in a road accident in May 1957 (then 14 years old). The case was brought by his father, Lee Cheng Teen, a former police officer.

However, another puzzle arises. From the article, Lee Tiong Hoe was only 14 years old in 1957, which means that Lee Tiong Hoe was born in 1943 or 10 years after the death of Lee Phan Hock in 1933. However in the tomb, there was already mentioned of a Lee Tiong Hoe has grandson. Was the name added on later or was this a case of co-incidence and mistaken identity ?

Grandson: Lee Tiong Hoe
Following this line of research, in May 15, 1957, a 14 year old Lee Tiong Hoe, a student of St. Andrew's School was involved in a motor-cycle accident that left him with bruising of the head that lead to headaches, giddiness and mental deterioration. His father decided to accompany him to Melbourne, Australia in 1960 for treatment. What transpired after that, i do not know as yet. 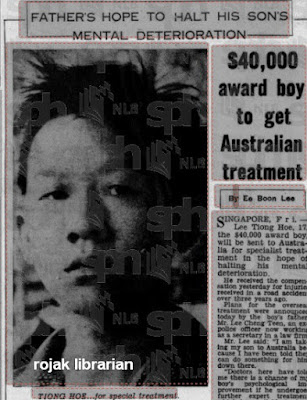 Daughter: Lee Tan Neo
No further information other than an article that mentioned Lee Tan Neo, daughter of Lee Phan Hock who was once married to Tan Kee Eng was ceased.