March 14, 2017 Block 1 Div A Bukit Brown Hill 1
Seet Beng Tee (6 January 1895 - 22 July 1924) was described as a popular young chinese businessman and brother of Mr. Tan Beng Chiang (a boxing promoter ). Seet Beng Tee had business in mining, estates and owned several properties in Singapore. Like his late father, Mr. Seet Tiang Lim, Seet Beng Tee has ties with the various Sultan's of Kedah, Kelantan and played host to them and prior to his illness, was a guest at the Sultan's Palace in Kedah.  Seet Beng Tee passed away at the age of 29 on 22 July 1924 at 2 am at his residence in 41 Desker Road. He was described to be ailing for the past year and was in poor health for many months prior to his death. He is the son of the late Mr. Seet Tiang Lim and is survived by his mother. He is buried in Hill 1 A, plot 66.

Seet Beng Tee's wife pre-deceased him and he has no children. From the tomb nearby Mr. Seet Beng Tee, i know that the name of his wife is Roseline Oey (1896 -1923) (Oei Po Tian , age 28 , 3 May 1923, Hill 1 plot 65). However engraved on Seet Beng Tee tomb are the name of two children , Seet Chong Kiat and Chwee Chin. In short, there is a discrepancy between what is reported in the papers and inscribed in the tomb. Reading further, i found a court ruling that gives insight that the children of Seet Beng Tee were adopted at infancy.

Father: Seet Tiang Lim
Seet Tiang Lim was born in Malacca of an old Straits Chinese family, but for many years resided in Singapore. He was at one time a merchant of the syndicate that has license from the Spirit and Opium's farm (before the government took it back under the Monopolies Department). Seet Tiang Lim is a close personal friend of the Sultan of Kelantan and as always played host when the Sultan visits Singapore. 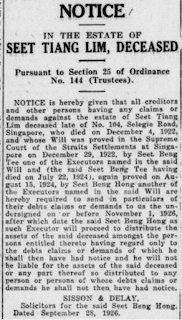