April 12, 2017 Block 4 Div B Bukit Brown Hill 4
Tan Geok Lim was an employee of the Raffles Hotel. He passed away at the age of 46 on 5th October 1937 at his residence in 41 Onan Road, leaving behind his beloved mother, wife and 5 children. Listed on Tan Geok Lim's tomb are the name of the 5 children; sons: Tan Eng Khoon, Tan Eng Chuan, Tan Eng Swee ; daughters; Tan Kim Neo and Tan Chwee Neo. Tan Geok Lim is buried in Hill 4 Section B, plot 282. 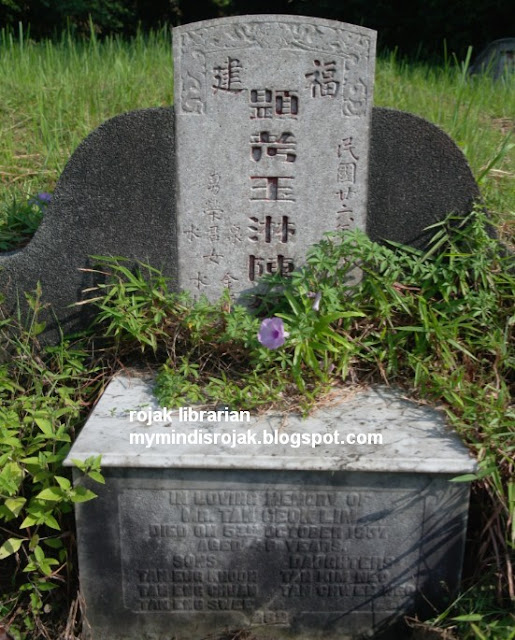 This is a first finding, well at least for me , of a person buried in Bukit Brown who was a staff of the Raffles Hotel and this is further confirmed in a 1921 newspaper article, where it list the donors by the Raffles Hotel staff for Princess Mary Wedding. On the list of Raffles staff list is not only Tan Geok Lim, but also Arshak Sarkies (1868- 9 January 1931), the proprietor of Raffles Hotel at that time. The Sarkies brothers ( Martin, Tigran, Aviet and Arshak) were well known hoteliers that owned and ran many hotels,  including the Eastern and Oriental Hotel in Penang and Seaview Hotel and Raffles Hotel in Singapore.

Arshak Sarkies was for 40 years, a proprietor of hotels and he was 62 years old when he passed away in Penang on 9 January 1931 after a long spell of poor health. He is survived by a widow and 3 daughters. In the same year, Sarkies Brothers Company went into receivership and its hotel eventually sold.