November 07, 2018 Gelong Pah Greater Bukit Brown Toa Payoh cemetery
While exploring the Hokkien Cemetery at the fringe of Bukit Brown Municipal Cemetery and the Toa Payoh Cemetery (in an area what i call Greater Bukit Brown and colloquially known as Gelong Pah 黎弄吧 ), we came across the tomb of Mr. Sie Yok Swie, age 28, who died on 13th March 1954. His name and date of death matches one of the 33 victims of the airplane crash of the British Overseas Airways Corporation (BOAC) Lockheed L-749A Constellation that happened in Kallang airport (the first plane crash in Kallang airport). Mr Sie Yok Siew was listed as a Jakarta Businessman and in one of the Australian papers, his occupation was listed as an Indonesian cattle handler. However as i was browsing further the online newspaper archives i found out that Sie Yok Siew was actually the youngest brother of cattle millionaire, Sie Yok Kie, who owns one of the biggest cattle trading company in Singapore, the Bali Cattle Trading, Cecil Street. Mr Sie Yok Swie leaves behind a young wife and 2 children.

A British Overseas Airways Corporation (BOAC) Lockheed L-749A Constellation carrying 40 crashed and caught fire as it attempted to land at Singapore-Kallang Airport on 13 March 1954 at 3:04 pm resulting in 33 fatalities (all 31 of its passengers died and 2 out of 9 of its crew members were killed). Details of how the airplane crashed and flipped over and the rescue attempts that took place and finally the public enquiry and investigation that took place can be found online at various sources, [Infopedia, Wikipedia], so i will not repeat them.

On 15th March 1954, a mass funeral was held for 24 of the crash victims. Of the 24 crash victims, 14 of them were yet to be identified when the cortege left the mortuary. The cortege of 3 Royal Air Force (RAF) trailers with motorcycle escort proceeded to Bidadari cemetery along Outram Road, Kim Seng Road, Irwell Bank, Paterson Road, Scotts, Road, Newtown Circus, Moulmenin Road, Balestier Road and Serangoon Road.  I do not know for sure the names of all 24, but with access to the burial registrar of Bidadari, one might be able get the complete name list. Another way is of course derived the other 9 victims who were not buried in Bidadari. So far, i manage to identify 6 names, other than Sie Yok Swie, whose tomb was rediscovered, the other crash victims that were claimed by friends and relatives include the body of Mr. G.F Olson, an American whose remains were flown to his family at Fort Madison, Iowa. 3 other Indian victims were cremated (J.P Sen Gupta, Amir Chand Chandra and M.C.T.M Chidambaram Chettiar). R. Bintang Soedibbie remains were returned to his hometown in Semarang.

Stories of the other victims 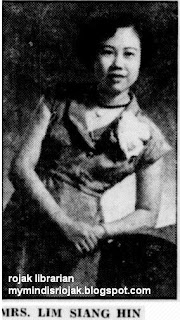 Mr. R. Bintang Soedbibbio
The only Indonesian passenger, Mr. R. Bintang Soedibbie, millionaire and father of several daughters in Jakarta. He celebrated his 52nd birthday in Singapore on Feb 24 and flew back Jakarta on a business trip. Mr. Soedibbie had many firms bearing his name in Jakarta, Semarang, Surabaya and Amsterdam. An Indonesia businessman from Semarang, his remains was flown back to his hometown in Semarang for burial. He was an importer of Opel cars.

M. Ct. M. Chidambaram Chettair
Mr. Chettair was 46 years old when he died. A Millionaire, he was the founder and Chairman of Indian Overseas Bank Ltd, United India Life and has many other connections with industrial and commercial firms in South India. Mr. Chettair was cremated at the Bidadari Hindu Cemetery on 14th March 1954 and his ashes brought back by to India and scattered at the Ganges River. However this was not the end of the story, as during investigation,they found a mix-up whereby the body of Chidambaram Chettair was incorrectly unidentified as Mr. Eric Moller by the Singapore Coroner and ended up being buried at the Bidadari Christian Cemetery. 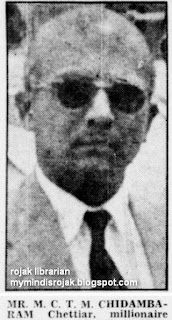 Eric Moller
Eric Moller Senior was a British Shipowner millionaire, who at the time of his retirement in 1940s. was one of the largest single shipowner in the world. 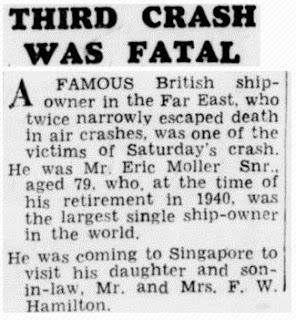