July 09, 2022 decorative tiles Lao Sua
The tomb of Chia Ong Tin was damaged by a tree and its headstone and shoulder had to be uprighted. I was pretty happy to see the tomb of Chia Ong Tin which not only list his age when he passed away (56) but also his date of birth (29 December 1862) and date of death (18 May 1918) . and all this in English.
I am also able to gather his obituary notice which reads that Chia Ong Tin, passed away at the age of 56 on 18 May 1918 at 6-2 Mackenzie Road, Singapore. He is the father of Chia Quee Eng, Chia Poh Choon and Chia Poh Hock. Finally it was mentioned that his remains were removed from 6-2 MacKenzie Road to the Chinese burial burial ground at Toah Pyoh (Toa Payoh) for interment.
When he passed away there was mentioned valuable jewelry being auction off. Article also mentioned  of a rubber estate of 102 acres at Pandan and Jurong that was sold in an auction (29 October 1919). His residence, No 6-2 MacKenzie Road, a freehold land 3,782 was eventually auction off on 22 April 1929.

In 1903,  Chia Ong Tin was granted license as Surveyors under the Surveyors Ordinance.
In 1904, 12 freehold building allotments of Mandalay Road (about 3 miles from town) with a total area 2,400 sq ft being lots 11 to 22 of lot 43 of Frant No. 3 was bought by Chia Ong Tin at 4.5 cents per square foot for a total of $1,080. In March 1905 there was mention that Agricultural land at Pandan Jurong District and West Bukit Timah with total area of 14 acres and 18 poles was bought by Chia Ong Tin for $474. In 1909, 3 freehold building allotments off Thompson Road adjacent to Kampong Java Road. The total area is 12,840 bought by Chia Ong Tin for $288.90.
In 1912, Chia Ong Tin and Ong Bin Bin paid $13,900 for Nos. 63,64,55 and 66 North Boat Quay. The property were auction of from the estate of Low Kim Pong (deceased).
When he passed away there was mentioned of a rubber estate of 102 acres that was sold in an auction (29 October 1919). His residence, No 6-2 MacKenzie Road, a freehold land 3,782 was eventually auction off on 22 April 1929.
Wife: Tan Lye Neo
Tan Lye Neo passed away on 9 May 1918 at her residence, No 6-2 McKenzie Road. Tan Lye Neo is the wife of Mr. Chia Ong Tin. This also means that Madam Tan Lye Neo passed away 9 days before her husband, Chia Ong Tin passed away. Her funeral took place on 18 May 1918 to Toah Payoh burial ground (the very same day her husband passed away 10.
Son: Chia Quee Eng / John Baptist Chia
Chia Quee Eng also tried to be a property owner like his father. He inherited $44,000 from his estate and used it to buy houses and shares. Unfortunately insights from the Bankruptcy Court date 13 May 1933 in which his investment incurred loses. He was made a bankrupt
Son: Chia Poh Hock
Chia Poh Hock (youngest son of the late Mr. and Mrs. Chia Ong Tin ) and brother of Messrs. Chia Quee Eng and Chia Poh Choon got engaged to Miss Gan Eng Neo (eldest daughter of Mr. and Mrs. Gan Chye Kiew).

Chia Ong Tin tomb is located just above (on the left side) looking up of the Lao Sua Temple.
The tomb also has decorative tiles (transfer print tiles) 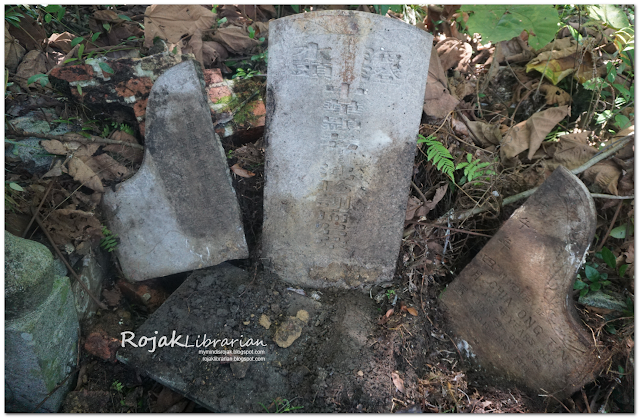 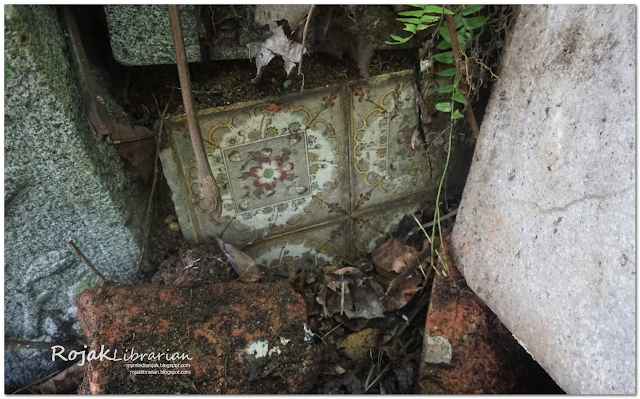