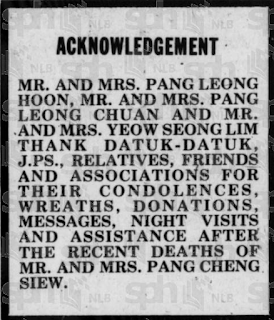 Daughter: Pang Chit Neo (Mrs. Ho Cheow Hin)
Madam Pang Chit Neo (sister of Mr. Pang Cheang Yean ) married Ho Cheow Hin. She passed away at the age of 95 on 31 March 1993. The wake was held at 54C Dalvey Road.  One of their sons, Ho Sim Guan became a banking tycoon and one of Singapore's richest man before he passed away at the age of 84 in October 2011. He was a director at United Overseas Bank for over 30 years before stepping down in 2002. Other than banking, he has stakes in breweries, rubber estates and the Haw Par Group (controlled by tycoon Wee Cho Yaw). He also owned Tai Tak Estates ( a private investment firm) and the Tai Tak group of companies. (Ho Cheow Hin is the son of Mr. Ho Siew Tian and Gwee Lip Neo).

Mrs. Pang Teck Teng nee Madam Koh Toh Neo tomb is located in Block 3 Section D,  plot 696 which states she was 90 years when she passed away and that the ashes are placed here. 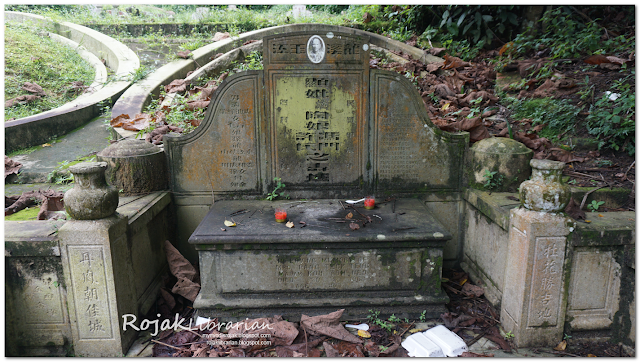