July 30, 2012 Bukit Brown Hill 2 pegged
During the rubber boom of the 1910, Khoo Kay Hian / Khoo Kay Hean was well positioned and made money as a rubber broker based in The Arcade. He went on to be the founder of one of the best known stock broking firm in Singapore bearing his namesake, Kay Hian and Co in 1921. He was also a committee member of the Singapore Sharebrokers' Association (this was before it became the Singapore Stock Exchange). Throughout his career, he held various positions and they included: Assistant Secretary of the Ee Hoe Hean Club (1918) ; Management Committee of the Garden Club (1920) Chinese Lantern Procession (1922), Joint Honorary Secretary together with Lim Kee Cheok. (Lim Chwee Chian was the Chairman) and also Committee member of the Singapore Chinese Girls School (1925). He contributed to various causes and some of them include: Kampong Martin Relief Fund (1916), Chinese Halifax Relief Fund (1917), Sir Arthur Young's Portrait Fund (1919), St Andrew's Hospital Building (1920), Nanyang University (1957).

When Dr Sun Yat Sen arrived in Singapore in December 1911 from Europe in the P&O steamer called Devanha, he was greeted by the Singapore revolutionary leaders which included Dr S.C. Yin,  Teo Eng Hock, Tan Lian Chye, Khoo Kay Hian and Lim Nee Soon. Dr Sun Yat Sen went on to stay at Mr Tan Boon Liat's Golden Bell Mansion, in Morse Road, Keppel Harbour. He was heavily guarded by bodyguards and detectives as he made plan for the final push to overthrow the Peking (Beijing) Qing Emperor and the final creation of a Republican government in the capital with the Emperor as a figurehead.

In 1912, Mr Lu Chi Ye, former Assistant Commissioner of Justice to the Provisional Government of China and chief assistant to Dr Wu Ting Fong came down to Singapore together with Khoo Kay Hian to seek investments from the Straits and Netherlands Indies Chinese. (Nanyang or Overseas Chinese ). They were greeted by the Chinese Consul-General in Singapore together with members of the Chinese Chamber of Commerce. Mr Lu Chi Ye and Khoo Kay Hian later will travel to Penang and the other Federal Malayan States (F.M.S) to seek investments in the opening of mines in China.

This were evidential ties between this pioneers and how Singapore and its residents played a very important role in the political and economical reform of China.

In 1939, at the age of 53, Khoo Kay Hian was charged and subsequently pleaded guilty and fine $1,000 for allowing his office in 20 Malacca Street to a betting house for horses. His son, Khoo Hock Choo, 17 years old at the time pleaded guilty in an amended charged of  attempting to cause the disappearance of the 3 betting slip that were on his father's desk when it was raided by the police, by throwing it out of the window, with intention of protecting his father from legal punishment was fined $100. It was according in their lawyers defence, their first offence.

In 1961, a 21 year old youth impersonated himself as a police inspector to search Khoo Kay Hian's house in St. Martin's Drive. The "police impersonator" found opium smoking utensils and Khoo Kay Hian offered him a bribe of $1,000 to look the other way. He accepted the bribe, but however did not get away scot-free because Khoo Kay Hian's son reported this "policeman" to the Corrupt Practices Investigation Bureau and the youth was later charge in the courts.

Khoo Kay Hian passed away on January 18, 1966 reported at the age of 81 at his residence at 23 St. Martin's Drive at 9:35pm (however on his grave, he is listed to be 78 and a small plaque below it, 79 years of age.) He is survived by his wife, Madam Lee Poh Neo, (daughter of  Mr Lee Woon Chwee and Wee Whye Neo) a son (Khoo Hock Choo) and 3 daughters. (Helen Khoo Hong Peng, Irene Khoo Hong Leng and Khoo Hong Wan).  Khoo Kay Hian / Khoo Kay Hean , his wives, mother are buried in a cluster together in Hill 2, Division B.

Son: Khoo Hock Tian (1906-1961)
Khoo Hock Tian was a partner of Messrs. Khoo Kay Hian & Co. In 17th September 1935 there was an article stating that invitations have been issued by Mr and Mrs Khoo Kay Hian for the marriage of their second, Mr. Khoo Hock Tian to Miss Koh Eng Beng (Gloria Koh), sister of Mr. Koh Chwee Orr at the Hoe Hean Club Singapore. 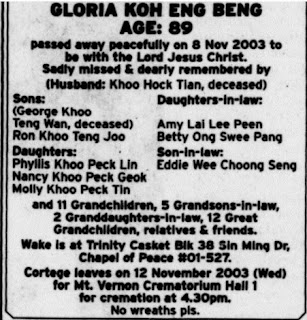 Listed on her tomb is a daughter: Khoo Hong Leng and son: Khoo Hock Choo