July 15, 2012 Bukit Brown Hill 2 sikh guard Stories from the Stones
Located at Hill 2 Division F, this is one of the unique tomb in Bukit Brown where it is flanked by two unique topless or sometimes known to others as naked angels, two sikh guards and two lions symbolising a truly hybrid tomb where traditional chinese and western influences are integrated or infused. This tomb belongs to Mr. and Mrs. Teo Chin Chay.

Mr Teo Chin Chay is a trader and the proprietor of Chop Hock Chin Leong whose office is located at No 3, Synagogue Road. He had owned godowns (warehouse) at Alkaff Quay  which stocks rattan and other materials and godowns at No 72-13 Mohamed Sultan and No 63 Kassim Street.

It was reported that the godown at Alkaff Quay caught fire and all its goods destroy in 1924. Mr Teo Chin Chay was however lucky as it was insured by various insurers such as The Sun Insurance, The Eastern United Assurance, The Shanghai Fire and Marine Insurance and The South British Insurance.

In an article dated February 11, 1932, i noticed on the papers a Bankruptcy notice. I do not know the outcome of it, but judging by the size of the tomb, i am sure his wealth was relatively intact. 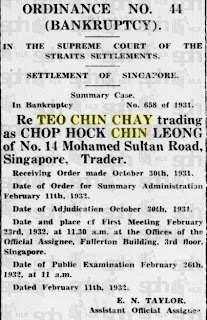 He donated money to the Child Welfare Society and King Edward VIII fund among others.

I have yet to find the death notice of Mr Teo, but he died in 15 September 1935.  His wife Madam Gan Chwee Sian passed away at the age of 51 at 3 am, 2 December 1927 at her residence at No 121-8 River Valley Road and is buried beside Teo Chin Chay. She was said to be of bounded feet.

She left behind 5 sons. Two of the sons were mentioned in the papers: Teo Soon Hoe, Teo Kian Tan among others, 5 daughters. In a cluster of tombs in front of his tombs lies two other tombs that were determined by his descendants to be his two other wives.  (Seow Kim Lian and Oen Sian Neo)

The cluster of graves of Teo Chin Chay were recently refurbished by their descendants (great grand children) who cleared the area, as well as cleaned up the tombs, making the whole area accessible as well as the intricate carvings that surround the tomb mount, visible compared to the earlier pictures you have seen. It is also good reminder of filial piety that continue to exist and that this tombs have not been forgotten despite 3 generations have past.

Stories from the stones

Scrape the Poison from the Bone
Guan Yu (Yunchang) was a general serving under the warlord Liu Bei and this story was popularised in the historical novel Romance of the Three Kingdoms.During a battle in Fancheng (present Xiangfan, Hubei Province), Guan Yu was shot in the right arm by a poisonous arrow, whose poison had infiltrated into the bone. Other military men invited Hua Tuo, a highly skilled doctor, to treat his injury. Hua Tuo said that he would need to tighten Guan’s hands with ropes, blindfolded his eyes, and then began the surgery. Guan said that he didn’t need to be bundled; instead, he drank some wine and began playing chess with others, while extending his right arm for Hua Tuo to do the operation. Hua cut the flesh, scraped the bone. Guan Yu kept playing chess while drinking. After Hua scraped the poison off the bone, Guan Yu said with a smile that his arm could move freely just like before.
Zhuge Liang's Southern Campaign
The clue from this panel is the gentleman sitting in the wheelchair holding a feather fan provides the clue. The person is no other than Zhuge Liang (諸葛亮). The next clue is the battle taking place between 2 warriors and if you look carefully one of them is on an elephant !
The story is likely about an event that took place during Zhuge Liang's Southern Campaign against an uprising by rebellious forces in the south (Nanzhong -which covers present-day Yunnan, Guizhou and southern Sichuan). The elephant is representation of the "Southern Barbarians" challenging the Shu kingdom. This event, now often label as fictional is about the “Seven Captures of Meng Huo” (七擒孟获) depicts Zhuge Liang using a psychological strategy by capturing leader Meng Huo seven times and setting him free seven times, convincing him that he would always lose the battle, avoiding further bloodshed and gaining loyalty of the people in the South.