July 17, 2012 Alexandra Cemetery Architecture Bukit Brown Family - Tan Kheam Hock Hill 3 Street Name after Pioneers
Tan Kheam Hock /Tan Khiam Hock / 陈谦福 (1862-1922) was born in Penang to Mr and Mrs Tan Teng Poh and received his education in Penang Free School. He joined the Merchantile Bank before leaving for Calcutta, India to be a merchant in 1877, remaining there until 1899 before coming back to Singapore to join the syndicate that had the rights to Opium and Spirit Farms. In 1901, he became the labor contractor for the Singapore Harbor Board, which at at its peak provided over 5,000 labor force. Tan Kheam Hock was also the Chairman of Eastern United Assurance Corporation, Great Eastern Life Assurance and Director of an array of tin, rubber and industrial companies. Tan Kheam Hock was a Senior Municipal Commissioner, Straits Chinese British Association, Chinese Advisory Board, Justice of Peace (Board of Licensing Justices), First member of the King Edward VII Medical College (when he passed away Mr See Tiong Wah replaced him) and the Hospital Board.

It was during the time when Tan Kheam Hock and See Tiong Wah were Municipal Commissioners, that Bukit Brown Cemetery was conceptualised as a public cemetery for all Chinese irrespective of the dialect group they belong to. Initially unpopular because of size constraints, they worked and made the necessary changes to make it acceptable and popular among the Chinese community

On  21 April 1922, while Tan Kheam Hock was at the Chinese Weekly Entertainment Club, he was hit by apoplectic stroke at 6 pm. Despite medical aid, he succumbed to the seizure without regaining consciousness at his residence in No 106, River Valley Road (known as Penang Cot) hours later at 9 pm. He was 61 years old. Originally interned in Alexandra Private Cemetery, the remains were relocated to Bukit Brown together with his wife (Oh Peang Neo) and daughter (Tan Keow Gnoh).

Madam Oh Peang Neo, died at the age of 48 on May 6, 1913 due to heart failure. She was the mother of Chong Khee, Chong Lay,Chong Chew, Chong Teck, Chong Gark and Chong Teat)

He was a Justice of Peace. An avid house owner with horses such as King Cole, Spangle, Penang Griffin No 2 and Pam. He was a pedigree dog breeder who participated in many competitions as well. Tan Chong Chew was the manager of the Eastern Mining and Rubber Company and eventually manager of the Tanjong Pagar Labour Company. Tan Chong Chew married Miss Foo Gim Yong (daughter of Mr and Mrs Foo Boon Sean).
Sons: Tan Huck Wan, Tan Huck Hean.
Daughter: Daisy Tan

*yet to be confirmed with substantial information. Speculation at the moment.

Daughter: Tan Keow Gnoh (eldest daughter), died on July 2, 1917 ; age 32 years
Tan Keow Gnoh passed away in 1917 and is survived by her widow (Mr Lim Mah Siang) and 6 children. Initally buried in their family plot in Alexandra, but later exhumed and reburied together with his father, Tan Kheam Hock. 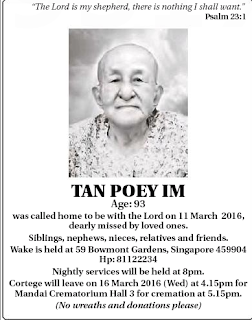 [Research still-ongoing, any feedback for corrections, leads or pictures are welcomed. Do email me]