June 06, 2013 Bukit Brown Division B Hill 1
Chew Bah Kah studied in St Joseph Institution and worked as a clerk before going into his own business as a haulage contractor. In a tender accepted by the Municipal Commission, the tender was awarded to Chew Bah Kah to supply fine sand from Sungei Ringget (Sungai Rengit, Johor) at $2.15 per cubic yard.
From the son of R.B. Lewis, i found out that Chew Bah Kah also managed Poh Lye & Co. General Contractors at 158 Mackenzie Road. Chew Bah Kah provided contract work for Hume Pipe among others and he has 18 lorries operating for his company. I found out from Col Lewis (the son of Mr. R.B. Lewis) that his father went to Singapore in 1926 to set up a factory to make Hume Pipes. R.B. Lewis later went on to become the Director-General of the Australian Commonwealth Dept of Works.

In 1950, Chew Bah Kah entered the little hut of elderly Mrs Ong Kim (who lived with her paralysed 30 year daughter and 10 year old grandson) and saw the dilapidated condition of her hut and thus decide to rebuilt her hut into a new house with two rooms, a living room and a kitchen. Beside building a home, he offered to give the 10 year boy $10 a month so he can go to school. In 1951, he repeated this deed by building a hut for destitute and paralysed Grandma Lau. Before that she was sleeping in a place exposed to all weathers under a frail shelter made of gunny bags and cardboards.
Relief for Fire Sufferers 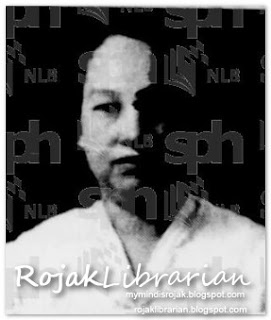 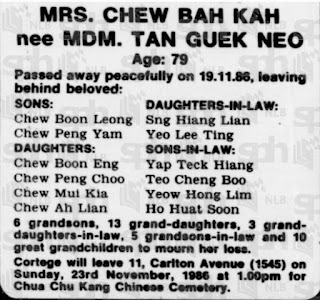