June 01, 2013 block 2 Division H Bukit Brown Doctor Hill 2
Dr. Oon Sim Kong studied in St.Joseph's Institution and  graduated from King Edward VII Medical School having passed his final examination in 1917. He went on to join Town Pharmacy at 144 South Bridge Road. His father was Mr Oon Chong Lock. His wife up to 1919 was Miss Khoo Lean Neo (eldest daughter of Kho Keng Chuan). In April 1919, a public notice went out by both parties in the newspaper giving me some insight of the reason of the separation. Miss Khoo Lean Neo highlighted family quarrels and disagreements, especially with Mr Oon Chong Lock's step daughter. 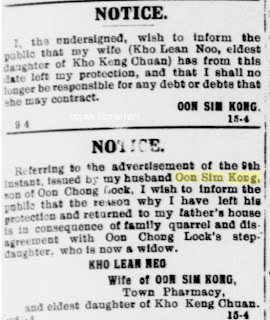