June 06, 2014 Block 4 Div A Bukit Brown decorative tiles Hill 4
Mr Cheong Choong Beng (son of Cheong Swee Whatt) was one of the original members of the Singapore Voluntary Infantry (S.V.I.). In 1909, he was a N.C.O. Corporal. In 1902, he was one of the Singapore Contingent who went to England for the Coronation Ceremony. Cheong Choon Kim and Cheong Choon Beng established Yap Whatt & Co, in d'Almeida Street, which was the first Straits born Chinese firm engaged in commission, import and export trade. The company became well known as an intermediary between Chinese dealers and shopkeepers and the European manufacturers. When his brother, Cheong Choon Kim passed away in 1905 due to apoplectic stroke, Cheong Choon Beng took over.


Death
Mr. Cheong Choon Beng passed away on March 25, 1913 at the age of 44, also due to apoplectic stroke. He was travelling with his eldest son, Cheong Chee Hai visiting rubber estates in Seremban and Kuala Lumpur and were returning to Singapore via a night mail train when he had a stroke around 6:45 pm and died. His remains left his residence in 8, Thomson Road for internment at Bukit Timah Cemetery on March 29, 1913. 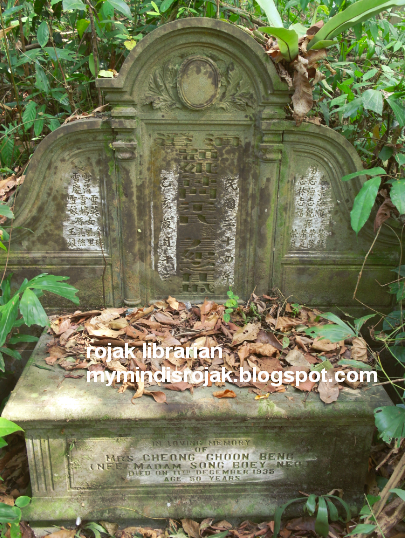 Grandfather: Cheong Ann Jan
Cheong Ann Jan (1818-1881) came to Singapore in 1844 and worked for Hamilton, Padday & Co. (later Hamilton, Gray & Co. ) in Battery Road and rose up to the ranks to Storekeeper in which he served till his death in 1881. Of his fives sons, Cheong Swee Kiat was the Camprodore of Merchantile Bank until he passed away in 1891. His other son was Cheong Swee Whatt. Cheong Ann Jan's only daughter married Tan Hoon Soon and was the mother of Tan Gin Hock, managing partner of firm Hoon Keat & Co, general provision merchants in Raffles Place.

Father: Cheong Swee Whatt
Cheong Swee Whatt was the Camprodore of Banque de L'Indo-Chine until his death in 1907. His sons, Cheong Choon Kim and Cheong Choon Beng became propertiers of Yap Whatt & Co, which was established in 1893 as Commissioning Agents and Import and Export Merchants.

Son: Dr. Cheong Chee Hai
Dr. Cheong Chee Hai was born on May 29, 1893 and educated in Raffles Institution. A talented student, he was for 3 years running (1907-1909), a Cecil Smith scholar. He join the local medical school and later Hong Kong University and graduated in 1916 in M.B. , B.S. He returned to Singapore the same year and joined Dr Lim Boon Keng. He took over Dr. Lim Boon Keng's practice when Dr. Lim went to China to become the President of Amoy University. He is a member of the Straits Chinese British Association and President of the Straits Chinese Recreational Club. He was a Justice of Peace in 1924 and also a Municipal Commissioner in 1932. He holds the rank of Captain (retired) in S.V.C.