June 02, 2014 Block 4 Div C Bukit Brown Family - Cheang Hong Lim Hill 4
Cheang Jim Hean (1873-1901) is the eldest son of Mr. Cheang Hong Lim and his residence was at No 99 River Valley Road also known as Annan Bank. He had owned numerous property and also rented out property and equipment such as a rice mill.

Cheang Jim Hean Free School
Cheang Jim Hean and his father, Cheang Hong Lim founded this bilingual school in the 1892 in Havelock Road. Cheang Jim Hean manage the school which he contributed  $1200-2000 every year to its operation. On November 7, 1900 during an annual inspection, the inspectors concluded that after the school standards of teaching was good after examining performance of 97 boys. Unfortunately the school was closed suddenly after the death of Cheang Jim Hean in 1901 with at least 216 students affected. 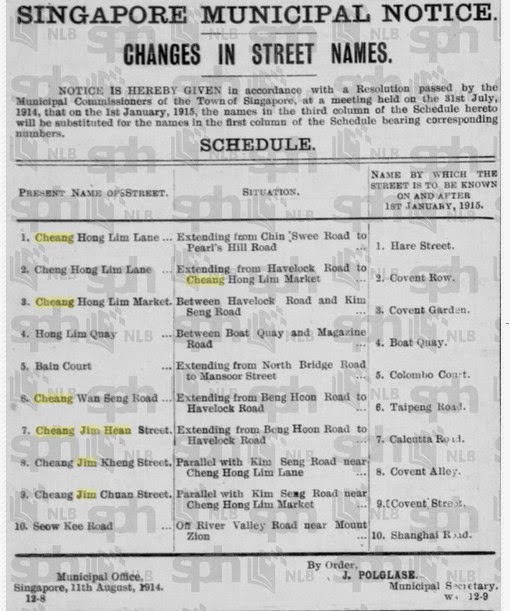 Death
Cheang Jim Hean passed away on April 1, 1901 at the age of 28 after a short illness at his residence, No 99 River Valley Road alias Annan Road. He was buried in the family private cemetery in Alexandra Road before being re-interred to Bukit Brown in 1961 together with his father, Cheang Hong Lim.

Wife: Madam Lim / 林智慧
From Raymond Goh's research, i found out the first wife of Cheang Jim Hean was a Madam Lim who passed away in 1895. She is the mother of Cheang Kok Boe / Cheang Kah Boe
Wife: Madam Khoo Ek Neo
Mrs Cheang Jim Hean nee Khoo Ek Neo passed away on October 16, 1961 at the age of 87 and is buried in Bukit Brown.
They are survived by their daughter: Cheang Tew Muey,
Grandsons: Loh Cheng Chye, Loh Cheng Ban, Loh Cheng Ann.
Grand daughters: Loh Cheng Kim, Loh Cheng Hor
Attempted grave robbery
A month after Cheang Jim Hean's death, there was an attempted grave robbery attempt at his tomb in Alexandra. The grave robbers manage to dig about two feet deep before being discovered. Mr H.H. Loh passed away after a long illness in his residence, Lions Gate, Pasir Panjang on September 1929. He was one time a prominent member of the Singapore Turf Club and owner of several well known horses. He leaves behind 1 widow, 6 sons and 3 daughters. He was buried in Bidadari.

Madam Cheang Tew Muey passed away on October 21, 1987 at the age of 89. She is survived by 3 sons: Albert, Francis, Andre and 2 daughters: Catherine, Honey.