June 01, 2014 Block 3 Div D Bukit Brown Family - Tan Ean Kiam Hill 3 war WWII
Tan Ean Teck was a prominent merchant and brother of Tan Ean Kiam. He came from Tong Ann, China to Singapore at the age of 16. He worked at his brothers company before starting his own as merchant (i suspect in rubber trading as well).  He was also a shareholder of the OCBC Bank. During the Japanese occupation, he played an important role in the resettlement of the local Chinese community  from Singapore into a new settlement called Endau. Unfortunately, this involvement lead to his eventual demise as well.

As a large portion of Singapore's food supply was imported, this created food shortages and in August 1943, the Japanese decided to evacuate about 300,000 Singaporeans (or 40% of the Singapore population) and to resettle them north of Singapore to cultivate the land there. Another theory was as Singapore island as a large concentration of Chinese, sending part of this to a new settlement may reduce the threat of an uprising. Two new settlements were established, one in Endau (Johore) for all Chinese and the other, Bahau (Negeri Sembilan) for Eurasians and Roman Catholics. Under the scheme, the Singapore population were encouraged to resettle outside Singapore, in areas where they could farm and live off the land. It was also known as New Syonan Model Farm. The person put in charge was Mamoru Shinozaki, Head of Welfare Department in the Syonan Municipality, who sought the co-operation of the Overseas Chinese Association (OCA) to build a settlement for Chinese in Endau. Each settlement would have a place of worship, a school, a hospital and an assembly hall. Each "settlers" were to be provided with 2-3 acres of land, tools for farming and food supply until they are able to sustain themselves. Tan Ean Teck was appointed as the vice chairman of the Agriculture Committee. The chairman was Tan Hoon Siang (great grandson of Tan Tock Seng). 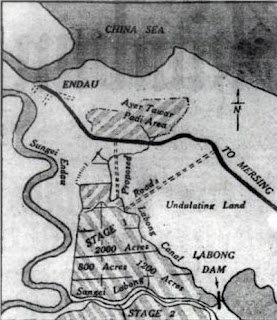 Yap Pheng Geck in his autobiography recounted the story of how he, as one of the pioneers who help build the Endau Settlement paid a visit to this settlement in an entourage together with other OCA members and Japanese authorities. He broke off from the convey in Kota Tinggi to rest before trying to catch up with the convey. About 10 miles after Kota Tinggi, he was shocked to see bodies lying by the side of the road (but the convoy of vehicles not within sight). Stopping his vehicle, Yap Pheng Geck rushed out to first see, Lee Choon Seng with a bloodied face and an unhurt but shocked Teochew shopkeeper from Endau. Two lifeless body was also discovered; a gentleman later identified as Mr. Tay Nee Ai and the other who was recognised immediately as Tan Ean Teck, a prominent Hokkien merchant and brother of Tan Ean Kiam, managing director of OCBC.

The Teochew shopkeeper recounted the story that the convoy was shot at by guerillas (likely the Malayan Anti-Japanese Army) and the vehicle owned by Shinozaki targeted at. Lee Choon Seng survived as a bullet was said to have hit the Vice-Chairman of Overseas Chinese Association (O.C.A) tin badge that he had to wear to identify him as a member and grazed his face. Another story has it that, Lee Choon Seng survived because it was said that a bullet hit a Buddhist medallion on his chest. This incident had a tremendous impact later on in his life as he went on to set up the Singapore Buddhist Federation and Singapore Buddhist Lodge and played an important role in the formation of Maha Bodhi School and spread of Buddhism in Singapore.

Tan Ean Teck passed away that faithful day on 19 April 1944 at the age of 42. It was reported in Syonan Times that the memorial service, touted as Syonan's first public funeral was held on 23 April 1944  for Tan Ean Teck and Tay Nee Ai and attended by Colonel Koichi Okubo (Mayor), Mr. Kanichi Naito (Deputy Mayor), Mr. K. Toyoda (Minsei-bu Cho), Mr. M. Nakata (Kosei-ka Cho), Mr. M. Shinzoaki (Keimu-bo Cho) and other high officials of the Tokubetu-si. Prior to the hearse leaving for Bukit Brown cemetery, a memorial service was held at the O.C.A and the service was led by Mr Lu Thien Poh, Chairman of the O.C.A Propaganda Committee.