July 27, 2016 Block 3 Div A Bukit Brown Family - Tan Gim Wee Hill 3 tomb mason
Tan Gim Wee was a pawnbroker of chop Teong Moh at No 472, North Bridge Road and from 1899 -1909, there were several mentions of auctions of unclaimed pawn items that took place in a very much regulated business even back then. In 1909, Tan Gim Wee got into trouble for taking into his pawnshop, 2 large stolen brass candlesticks without declaring or informing the police despite the fact a circular was sent out, He was fine $8 as well as losing out on the $4 advance he gave. The candlesticks was returned to the original owner.

He was the Secretary of the Yew Gee Hean Association in 1921. (The President of the Association during that year was was Seah Kim Soh). He also purchased several land and house in Geylang Road area.

The tomb is very ornate and art deco in design and features also a pair of Punjabi /Sikh Guards. The font type that inscribes their names are also unique. 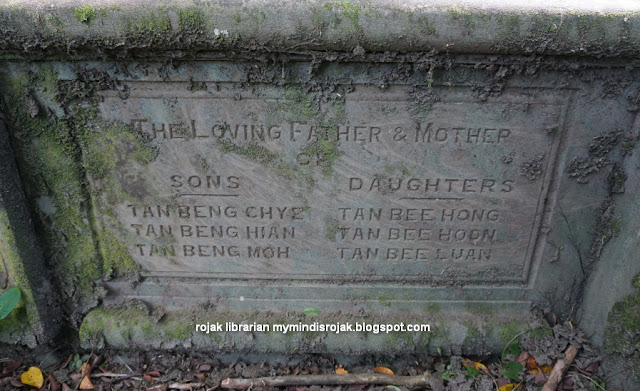 With the Chinese migrants came the system on borrowing and lending money via pawn shops. The early records of pawnshop in Singapore was in 1872, the Sheng He Dang (生和当) opened by Lan Qiu Shan (蓝秋山) and his partners at Jalan Bukit Merah. A government licensing system for pawnbrokers was established as early as 1822 during the administration of William Farquhar and the Pawnbrokers Ordinance passed in 1898 (during Tan Gim Wee's time of operations).  Initially dominated by the Hokkiens and Teochews, the Hakkas in the 1920's were the major owners of this pawnshops. If you are interested to read more, there are links i referenced below including one of how a pawnshop receipt looks like.

The tomb mason responsible for the cluster is Kian Cheong 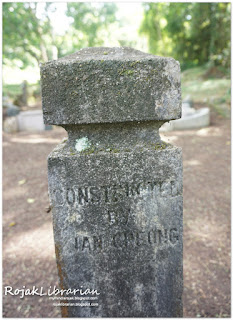