November 21, 2022 exhumed peck san teng cemetery tomb mason
Guarding the Peck San Theng temple are a pair of beautiful marble lions. On closer inspection, this are the lions that used to graced the tomb of famous building contractor, Wong Ah Fook (a bit about him later). The lions have also different facial expressions. One is in eternal sleep and the other is alert. On both lions, i can make out the artisan or company that constructed the pair of lions;
Raoul Bigazzi
Sculptor and Art Dealer
Florence
From all my explorations in Bukit Brown, i do see some tombs constructed of marble, but not for lion guardians which are all done in granite. So it must be a interesting decision to marry east and west styles for the tomb of Wong Ah Fook (i saw the picture of Wong Ah Fook's tomb in a photo in the booklet "Becoming Bishan" which also shows the location of the lion). Fortunately after the clearing of the cemetery to make way for housing, the lions were saved and gifted by the family of Wong Ah Fook to the Kwang Wai Siew Peck San Theng Temple

Raoul Bigazzi is an international sculptor and decorator who has his headquarters in Florence, Italy. His Far East headquarters is based in Hong Kong and is a specialist in marble and bronze portraits. An 1922 advertisement also mentioned that their works also include Monuments, Memorials and Portraits as part of his collection of works. It agents here was, Frankels Ltd, (1920's)  A. Clouet & Co. (Malaya) Ltd (1950's and 1960's) and in later years, The Jardine Waugh Organisation and subsequently The China Engineers Ltd. 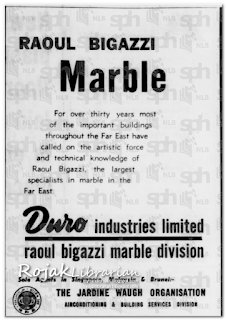 Wong Ah Fook's lions was not the only job related to memorial stones. In 11 January 1922, there was mention that the family of the late Mr. Chan Kai Ming commissioned Raoul Bigazzi to build a monument for him. The end product was a marble head bust of his likeness located at the Hong Kong Chinese Permanent Cemetery in Aberdeen.

Wong Ah Fook came to Singapore at the age of 16 and eventually got his big break in Johore, working his way up to be one of the biggest Government contractors. He was awarded the S.M.J by the Sultan of Johor and was also a Justice of Peace. He has many business and properties in Johore and China, managing director of the Kwong Yik Bank and the lucrative gaming license (gambling license) . Among the landmarks he was involved in was the construction of the Istana Besar in Johore and the Victoria Memorial Hall in Singapore.
He donated generously to the Kwong Wai Shiu Hospital and also donated to the Peck San Theng. He also purchased a large plot of land on the 5th pavilion where his tomb was one of the grandest. Wong Ah Fook passed away on at his residence at 80 Kampong Java Road at the age of 82 on 12 September 1918 and is survived by his widow, 4 sons, (Messrs. S.K. Wong, S.C. Wong, S.Q. Wong, S.Y. Wong, 4 daughters and many grandchildren. Mrs. Wong Ah Fook passed away at the age of 82 on 13 February 1932 at 75 Keng Lee Road. Raoul Bigazzi's work's in Singapore
The list of works done by Raoul Bigazzi is not exhaustive and many examples have been mentioned of works done in Hong Kong, Brunei, Malaya and Singapore. I will just mentioned in passing some of the one's done in Singapore.  Works in Singapore (pre 1942) include the "Eu Villa" -the mansion of Eu Tong Sen, Supreme Court, Hong Kong Bank, Meyer Chambers, Union Insurance building. Post war works include the Bank of China, Finlayson House, Odeon Cinema and the Lim Bo Seng Memorial.
A landmark that is very much visible today is the main facade of the Railway Station with the blue shields of F.M.S.R and the 4 huge marble figures depicting agriculture, commerce, industry, transport and A nine-foot-high statue of a bare-footed man carrying a sheaf of corn over his shoulders and grasping a scythe in his left hand represents agriculture. Commerce is a Greek-like figure of a man holding an open scroll in the right hand and a bag of money in the other. A half-naked man with a huge block stone on his left shoulder represents transport, while industry is depicted by a well-built, muscular man wielding a mallet. The figure were done by Italian sculptor, Angelino Vanette, from the studios of Raoul Bigazzi.