December 04, 2011 Batam Bricks Block 3 Div C Bukit Brown Family - Ong Sam Leong filial piety Stone Carvings Stories from the Stones
Ong Sam Leong (王三龙) (1857 -1918) was the owner of Sam Leong and Company that provided and supplied manpower (indentured labourers) for the mining of phosphate to Christmas Island and large business in timber, oil, rubber estates, rubber treating and rubber estates supplies, owner of substantial land and properties and head of the firm Ong Sam Leong Co. carrying on business in South Canal Road and North Bridge Road. He even owned a brick works in Batam known as the Batam Brick Works. Among the Chinese community he was influential as well, being once the head of the Ban Chye Hoe Club. Even up to 1967, a Straits Time article dated March 27, 1967 mentions that Ong Sam Leong's wealth existed with a government announcement of urban renewal in Rochor area in which Sam Leong's estate was affected. I wonder if any of his estate  and wealth still exist today among his grand or great grand children?
Ong Sam Leong passed away at on 7 February 1918 in his residence at Bukit Rose, located at Bukit Timah Road at the age of 60. The cause of death was heart failure. Ong Sam Leong is survived by his widow,  1 daughter (Ong Boey Neo), 2 sons (Ong Boon Tat, Ong Peng Hock), and 2 grandson to mourn his loss. He is buried what was known at that time as the Seh Ong Private Cemetery, Bukit Timah Road.
I also found substantial write-up and pictures in the newpapers of his wife, Mrs Ong Sam Leong nee Madam Yeo Yean Neo (see Mrs. Ong Sam Leong's funeral) with his two sons, Ong Boon Tat and Ong Peng Hock. It was said that their sons loved their mother dearly and this can be seen by the lavish birthday celebrations they threw for her in 1932 for her 69th birthday (She passed away 3 years later at the age of 72). I love the tuxedo outfits of the Ong brothers along with the peranakan style of Mrs Ong Sam Leong. Another interesting fact is that Mrs Ong Sam Leong nee Yeo Yean Neo (daughter of Mr and Mrs. Yeo Koon Im) was one of the first pupils of Miss Sophia Blackmore of the Methodist Mission (Methodist Girl's School) in 1887.

The funeral procession of Mr. and Mrs. Ong Sam Leong were a very grand affair and reflective of the size of their tombs in Bukit Brown. From a Bukit Brown exhibition held in the National Library back in 2014. The actual funeral took place on 3 March 1918 (almost 1 month after his death). The procession included representatives from a dozen Chinese Associations, the bier which is placed on top the coffin was constructed to represent a Chinese temple and a Sikh band accompanied the procession playing the Death March as the hearse left the family residence of Bukit Rose at Bukit Timah Road for Seh Ong private cemetery. In front of the bier was of course the deceased family members.
During Mrs. Ong Sam Leong funeral procession, the Sultan of Johor extended the Johore State Band to play during her funeral procession. That was how influential Ong Sam Leong and family were during that time. Over 3,000 people attended.

Ong Sam Leong's sons, Ong Boon Tat and Ong Peng Hock were also the proprietors of the New World Amusement Park. When they eventually passed away, they were buried near their parents. His daughter, Ong Boey Neo who married Khoo Peck Lock (son of rice merchant and shipowner, Khoo Phee Soon), is also buried nearby. The  Ong Sam Leong tomb is touted to be largest in Bukit Brown and at the time of his death, the burial place was exclusively for the Seh Ong's only before it eventually became a municipal cemetery subject to size restrictions. Located up a hill, it's security is provided by two lions and two sikh guards. Other than its sheer size, what makes it unique is the huge earth deity it has (the size of a normal tomb), a huge moat that was according to stories used by the local village children and cemetery workers as their "swimming pool".

What is also beautiful is the complete 24 stories of filial piety, that graced their tomb. Some of the stories can be found here: 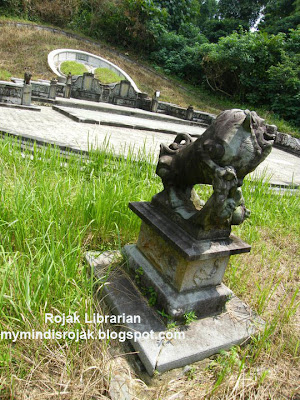