January 17, 2012 Bukit Brown Family - Tan Tye Tongmenghui
Tan Lian Chye alias Tan Chor Lam  (1884-1971) is another important personality buried in Bukit Brown. His father, Tan Tye (died 1898) was a prominent Hokkien chinese merchant, that owned a timber-yard called Messrs Tan Tye and Co or  Hup Choon  located at 327 Beach Road. They also had businesses in rubber and pineapple plantations as well as numerous properties. The alias Chor Lam was said to be acquired has he wanted to go incognito initially when working with the Tung Meng Hui. He went on to be the first President of the Tung Meng Hui, Singapore chapter.

Tan Chor Lam, Teo Eng Hock and Lim Nee Soon Connection
Although all were of different ages, Tan Chor Lam (then 18) and Eng Hock (then 30) were neighbors in Beach Road and were also proprietors of the Thoe Lam Jit Poh, a Chinese newspaper in Singapore in 1904 (The newspaper ceased to exist in 1905). Lim Nee Soon's (then 20) uncle is Teo Eng Hock and Lim Nee Soon's first job is with Messrs Tan Tye and Co. It all fell together nicely right !

Whispers of Revolution
Teo Eng Hock loaned his home, (the Bin Chan House) for the holding of the Revolutionary meetings. The Tung Meng Hui first three local members were Tan Chor Lam, Teo Eng Hock and Li Chu Ch'ih. The following day Lim Nee Soon (nephew of Teo Eng Hock) and eleven others' joined. Tan Chor Lam was elected the President of Tung Meng Hui, Singapore.
It was from here that, Dr Sun Yat Sen and his members managed to get ex-royalist and/or reformist from Penang, Ipoh, Kuala Lumpur, etc to join the movement. It can be said that Singapore was the base for the spread of this revolutionary movement. That been said, it also experienced various degrees of success in gathering funds from the Overseas Chinese here and at one stage, Penang overtook to be the key center where Dr. Sun planned some of the more important uprisings.

With the success of Dr Sun's movement and birth of the Republic of China, a political party was also born out of this movement - the Kuomintang. Formed in China in Aug 1912, its principal aim was the political and racial unity of the 5 races of China. It has to also into building up China's economy through industrialisation and modernisation.

Although some of the members (such as Lim Boon Keng) have dual loyalities to both the Colonial government and China, the British government viewed this party with distrust and treated it as a subversive organisation whose aim is to colonise Malaya or to rid it of its Western occupiers. Suspicions increased due to the outlawing of the Kuomintang by President Yuan Shih Kai in 1913 and the infiltration of the Communist doctrines within the Kuomintang leftist members that were blamed for a series of labor strikes and riots that occurred.

The attempts of the Kuomintang in creating a China centric nationalism soon came to conflict with the Colonial Government's attempt to create a harmonious multiracial subjects loyal to the British. Despite being banned twice, it survived into the post war years until it was banned for the third time in 1949.However this is not the focus of this story  and i guess something you might want to read further if you are keen.

Suits and Bankruptcy woes
Going through the digital paper archives, we see him facing financial difficulties over the years. What happen i am not very sure myself but it could be because of his constant contributions and attention to the revolutionary causes that lead to this or the economic depression or both. What is pretty certain is that he overcame all this and still survived with a house and grandchildren to boast.
Pictures over the years

The photo on the left shows Chor Lam as young revolutionist still sporting the Manchu queue hairstyle when he became a member of the Tung Meng Hui. It was said that he wore it out of respect to his late father's /mother's wishes and it was only much later that he cut it off. (I suspect after the fall of the Qing Dynasty). The photo on the top right shows him in the twilight years. That photo was used for his gravestone in Bukit Brown. The pictures above are taken from the exhibition at the Sun Yat Sen Memorial Museum.

What happen to him in his later life is a blur to me at the moment. Hopefully with more research i am able to find out more. I really have new found respect for historians or budding historians who seem to be able to dig up endless stories. If you have time, do visit the Sun Yat Sen Nanyang Memorial Hall .There, you will find out a bit more about the Tung Meng Hui members.

Bukit Brown Connection
Tan Lian Chye alias Tan Chor Lam, died 1971 and is buried in Block 3, Division A, plot 1256. His grave his very close to the road and easy to visit. 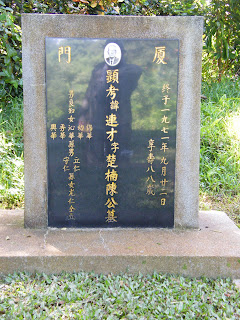