October 10, 2012 Block 4 Div C Bukit Brown Hill 4
Chua Keh Hai (1889-1939) was born in Singapore and studied in Raffles Institution. He came from a distinguished family and one of his early ancestors was Prime Minister in China during the Chung dynasty. He entered into Government Service and with the Land Office for about 15 years. He then left and joined the Ho Hong Bank Group. He later joined the Overseas Chinese Bank as Exchange Manager for many years including a stint in Hong Kong. He returned to Singapore and joined the United Chinese Bank.  Chua Keh Wai was a secretary of Ho Hong Bank and a shareholder of United Chinese Bank  (precursor of United Overseas Bank). He also held various positions such as:
He was a Municipal Commissioner (1935) and during his time as Commissioner, he was involved in many of the early nation development changes. An example, in 1936, he made a earnest plea for cheaper piped water as this was a basic necessity for all. He was appointed a Justice of Peace in 1937 and received the Coronation Medal in 1937. 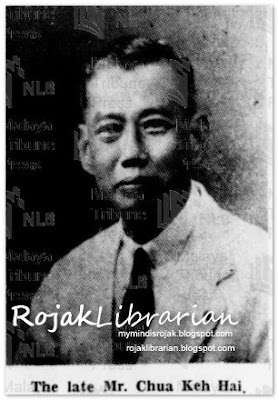 Wife: Madam Lee Swee Har (1907-1952)
Madam Lee Swee Har is the daughter of Mr Lee Peck Hock, M.B.E. and Madam Yeo Kim Neo. Madam Lee Swee Har passed away at the age of 45 at her residence in No. 13 Adam Road on 24th September 1952. She is the sister-in-law of Dr. Chua Chow Teck and leaves behind 2 sons (Edward and Jeen Tee) and 4 daughters (Polly, Dolly, Alice and Jessie) and grandchildren.

Wife: Madam Lee Swee Neo
In an article dated 3 December 1920, there was a mention of another Mrs. Chua Keh Hai nee Lee Swee Neo who died 28th November 1920. Her funeral took place on the 30th and the cortege left from 98-1 Orchard Road and she was buried in Alexandra Road Burial Ground. (Sang Kow Tian).

Chua Keh Hai's tomb was one of the rare few if not the only one in Bukit Brown, in which the side panels are inscribed the condolence message from the British Colonial Government, the Secretary for Chinese Affairs, A.B. Jordan and on another corner, the Municipal Secretary, J.H. Goldie. His tomb is located in Hill 4, Section C.