October 20, 2012
I am back in Ubin after a long hiatus. It is the start of the migratory season and I was hoping to spot some migratory birds in Ubin. Arrived at Ubin jetty at 8 am and immediately was greeted by a flock of glossy starlings perched on top of the Perepat mangrove trees.

Right in front of the NParks Information Kiosk, the common Eurasian Sparrow sparked my curiosity as it was pecking on the flower buds of a bougainvillea shrub. I have never seen a Sparrow do this before. I wondered why ! Our luck continued when a Crimson Sunbird perched on the fencing of a house and gave us an enthusiastic chirp.

Checking the tower for raptor's proved rewarding when i spotted a raptor perched on almost the top of it. It shifted to next tower after chasing away a curious /pesky crow and there it stood perched for a long time resting and preening itself. We believe its a Peregrine Falcon, a migratory bird from North Asia, that is commonly seen in this region during the October to April period. 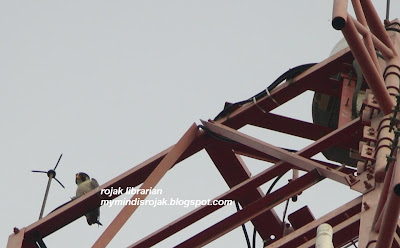 While trying to find the Oriental Pied Hornbill that i heard via its call, i sighted a huge bee nest. I was told later it was the nest of  Giant honeybee (Apis dorsata). The sighting of bee nest to me is not something to be feared but rather a good sign that the woodlands in Ubin  are healthy and pollination is facilitated by this bees. 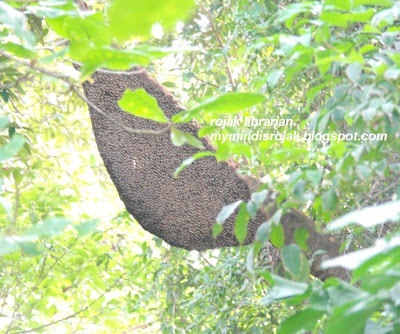 Other birds that i managed to catch sight of other than the Oriental Pied Hornbills are a pair of Lesser Flameback woodpeckers on a coconut tree and finally what i think is a Juvenile Magpie Robin.

It's been a great outing in Ubin, we caught sight of Grey Herons, Brahminy Kite (2 in flight), White-bellied sea eagle,  a glimpse of a Coucal darting away into a undergrowth among others. A final interesting sight is to see a female jungle fowl ( geek speak for wild chicken ) taking flight after being spooked by us ! Always amazing to see this wild chicken in flight and they sure can fly high and far compared to the domesticated one.

What i wanted to share also is that its durian season in Ubin, with most of the durian trees in Ubin bearing fruits which look like they will ripen and fall anytime in the coming weeks....So bird lovers, durian lovers.....what you waiting for ? Head on down !