October 29, 2012 Bukit Brown Division C Hill 4 Lao Sua
Wee Theam Tew was one of Singapore's leading Chinese pioneer in the legal practice. He comes from a family who have resided in Singapore for three generations. His grandfather, Mr Wee Theam Soo came from China and together with Mr Lim Boon Keng's father and Cheang Hong Lim's father, acquired the first opium farm in Singapore.

Educated locally and a former student of Raffles Institution where he excelled in English and Chinese literature. It was also documented, Wee Theam Tew gave much encouragement and help to a student by the name of Lim Boon Keng. While at Raffles Institution, he met Wee Theam Tew, who owned a large collection of English books. The young Lim Boon Keng would often go over to Wee's house after school where he was given free run of the Wee family library. His regular visits to the Wee family home and his own voracious reading turned Dr. Lim Boon Keng into an outstanding student and Singapore's leading leader. (and that is another interesting story in itself)

Wee Theam Tew joined a commercial firm and rapidly progressed from a shipping clerk and after that a storekeeper to Messrs. MacAlister and Co. Attracted to the legal profession, and through the financial generosity from his benefactor, Mr Gan Eng Seng made it possible for him to be enrolled into Lincoln's Inn and called to Bar in 1897.

The rise and fall of the Prominent Lawyer

Returning from London, he worked he work for a short stint as an Advocate and Soliciter before taking up the position as Secretary for the Prince of Su, Military Governor of Peking and Minister to the Emperor in 1904. That stint was short and the following year, he returned to Singapore as a Barrister. He repaid Gan Eng Seng back in kind by working hard in the Board of Trustees of Gan Eng Seng School to encourage the Straits Settlement Chinese to support the school. He was also a Municipal Commissioner that served in the Municipal Board as elected member of Rochore Ward in 1901. His office was at No 1 Change Alley. Mr Seow Poh Leng once worked as a clerk in his firm before moving to becoming the General Manager of Ho Hong Bank.

He was very sociable and was a member of the Singapore Chinese Weekly Entertainment Club during the time when Mr Lee Choon Guan was president and Dr Lim Boon Keng and Sir Song Ong Siang were members. He was also a committee member of the Straits Chinese British Association in 1901 during the time when the President was Mr Tan Jiak Kim. He was also a Sergeant in the Singapore Voluntary Infantry prior to leaving for Peking. Wee Theam Tew used to own the house in No 17 Armenian Street which was bought in 1910 by the "Sugar King", millionaire Oei Tiong Ham of Semarang for $11,000 who then donated the land for the building of Toa Nan School (and later Peranakan Museum).

Debarred and struck off the roll after being found guilty of 2 charges of perjury and sentenced to 2 years of rigorous imprisonment for the first offence. While being imprisoned, he stood trial for his second offence. He was found guilty and further sentenced another 2 years.

Failing health and illness eventually led to Wee Theam Tew's death in January 19, 1918 at the age of 52 ( he died a few months after being admitted to the lunatic asylum ). Wee Theam Tew is buried in Lao Sua. On his tomb, are the name of his sons. Wee Chye Hin, Wee Chye Huat, Wee Chye Hoe
Three daughters: Wee Guat Lian, Wee Guat Choon, Wee Guat Mui. 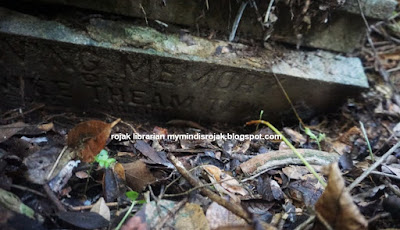 Wife: Madam Tan Bee Choo/Tan Buay Choo
His wife, Mrs Wee Theam Tew (Madam Tan Bee Choo / Madam Tan Buay Choo) died on December 13, 1939 at the age of 68 (tomb list her age as 72) at 49-A Emerald Hill. She left behind two sons, ( Wee Chye Hin, Wee Chye Hoe ) 4 daughters, 18 grandchildren (including Tan Hock Chuan), 1 son-in-law, 2 daughter-in laws. Her tomb is located in Hill 4 Section C, plot 1787
So far from the readings of past articles, especially this article where Wee Theam Tew's brothers were called to be witness to the case, gave me some insight on Wee Theam Tew's family. If any of you reading this article have further insights, feel free to leave a comment or email me.

His only son, Mr. Wee Chye Sin by name bears similarity to the name listed on Mrs Wee Theam Tew's obituary and the tomb as well. I wonder if they are the same individual and possibly Wee Theam Tew's son adopted by Wee Theam Seng.