May 16, 2013 Greater Bukit Brown Lao Sua
Wan Eng Kiat, born in Malacca, came down to Singapore at the age of 17 in 1851 to seek his fortune. For a short while he worked as a watchmaker, before entering the service of Messrs. Martin Dyce & Co. At the age of 24, he married Toh Nya Chik. He later went on to work for Messrs Puttfarcken, Rheiner & Co. (later renamed Messrs Puttfarcken & Co.) as a storekeeper, retiring eventually at the age of 68. Wan Eng Kiat was a clever and shrewed investor, putting his money in property. At the time of his death at the ripe old age of 85, on May 3, 1919 his assets were valued at half a million dollars ! He has 3 sons, Wan Boon Seng, Wan Boon Chwee and Wan Boon Lim. Wan Eng Kiat made a will in 1917 and in that will, he did not leave any immovable properties to Wan Boon Seng. Wan Boon Chwee died in 1941, leaving behind no sons while Wan Boon Lim died in 1972 leaving behind six sons from different marriages. Wan Eng Kiat had more than 1 wife from my research below. Unfortunately, no name of daughters have been found so far.

Son: Wan Boon Seng
Wan Boon Seng died on June 23, 1957 at 27, Lorong 104 Changi Road. In a court case in 1981, i gained further insight to the special request of Wan Eng Kiat's will which was that the residuary estate can only be sold 21 years after the death of his son, Wan Boon Seng. Wan Boon Seng was the most prolific translator of chinese classics to Baba Malay. He alone translated 21 titles between 1930-1939 and translated Botan Kingchoo in 1950. His pseudonym was Panah Peranakan. Not only did he translate and publish books, he also published Baba magazines, Bintang Pranakan, Sri Pranakan and Story Teller and two Baba newspapers, Kabar Slalu and Kabar Ucapan Baru. 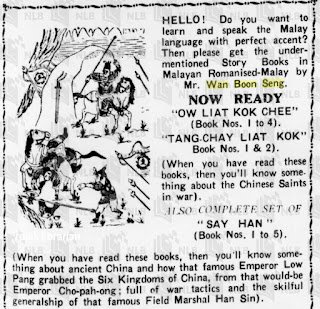 Son: Wan Boon Chwee
I don't much information other than the mentioned that Wan Boon Chwee died in 1941 without leaving any sons. When he passed away, Wan Boon Ling went to the trustee claiming for the late Wan Boon Chwee estate for the two infants of Wan Boon Lim, Harry Wan and Michael Wan.

Son: Wan Boon Lim alias Wan Cheng Ann
Wan Boon Lim was an English-speaking who inherited two-fifth of his father's $300,000 estate and a house in Jalan Besar and getting $65 a month for life. Yet on 1937 stood before the courts as a bankrupt at the age of 23. The bankruptcy happen when he being overly ambitious opened a provision store although he had only a capital of $500. The business was forced to close down owning to loses accumulated and bad debts over a few months of $1,500 after its opening. As a minor he had also sign as surety on a promissory note for her mother's debt. He mortgaged the house in Jalan Besar to pay partially for his business and mother's debts. The mother incurred the debts during the time she had to borrowed money to finance a case against the former trustee of her fathers estate.  Wan Boon Lim was the sole supporter of her mother and his young wife, 5 month old daughter, 12 year old sister and a aunt. He however manage to find a job that paid a salary of $40 a month. The court rule for an order to pay the creditors $15 a month.

Wan Eng Kiat's tomb was discovered on a Sunday trip to Lao Sua and was identified by Raymond Goh and Walter Lim. It was during the same trip, i identified the tomb of Madam Song Chit Neo as Mrs Chia Leong Chuan.