May 17, 2013 Block 3 Div B Bukit Brown Hill 3
Thio Sioe Kiat was born in Batavia and began work in his brother's firm,  Chop Hock Seng (Messrs. Hock Seng & Co) steamship agents,tin mine owners and general merchants. Established in Singapore, they have interests in tin mining and gambier and pepper planting in Banca, Netherland Indies. (Banka Island off Sumatra, Indonesia). They also owned a 600 ton steamer called Governor-General Myer which carries both passenger and cargo from Singapore, Muntok and Palembang. He then ventured into his own business. He was granted a certificate of naturalisation by the Governor as a British subject in 1910. 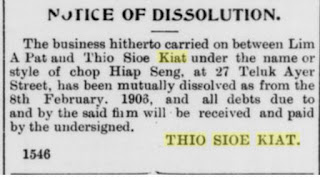 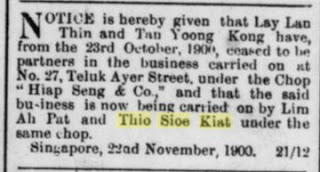 He also owned shares in The Overseas-Chinese Bank. However, in the slump of 1920-1921, he became a bankrupt having lost all his property and had to fold down in 3 firms. In one of his transactions he lost a princely sum of $40,000.