July 01, 2013 Banking Block 3 Div D Bukit Brown Family - Tan Ean Kiam Hill 3 war WW2-Tours
Tan Ean Kiam (陈延谦)(Tan Eang Khiam / Tan Ean Khiam) was a successful rubber magnate and banker. He together with Khoo Koh Wah established the Overseas Chinese Bank (OCB) in 1919 and became the Managing Director. The Chairman of the Bank at that time was Mr Lim Nee Soon.  Banks in the past were very much run by community leaders and "towkay's" of their respective dialect groups. As a way to strengthen the economic fundamentals of banks after a major recession and also to reflect the growing commonality of a unified "Chinese" identity not based on dialect groupings, Overseas Chinese Bank later merged with Ho Hong Bank and Chinese Commercial Bank on 31 October 1932 to form the Oversea-Chinese Banking Corporation or OCBC Bank. Tan Ean Kiam was its Managing Director until his death in 1943.

In Singapore, on the day of following its surrender, the Japanese Kempeitai rounded up all the officers of all the chinese banks and some of the directors and senior management of the banks were taken into custody. They were threatened upon release with orders to reopen the banks for business.
During the Japanese occupation, Tan Ean Kiam continued as Managing Director of the bank and was for a short period, the Vice-President of the Syonan Overseas Chinese Association before he had an heart attack and passed away on 30 March 1943. Lee Choon Seng succeeded Tan Ean Kiam and took the difficulty responsibility of working as "collaboraters" to support the Japanese Military rule which included the $50 million compensation demanded by the Japanese occupiers from all chinese in Singapore and Malaya.
The couplets on Tan Ean Kiam tomb contains a poem written by him which wisely says:

No need to bury me in my hometown
For the same quilt will have the same dream
just bury me and let have a deep sleep
for when you close the coffin lid, that will be my abode 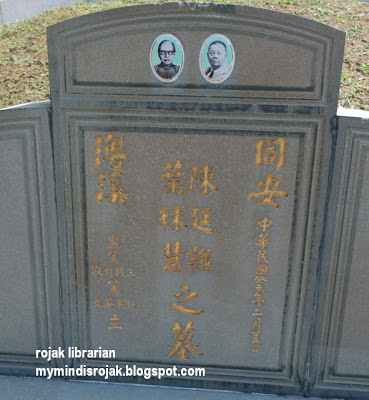 Wife: Madam Ng Hoon
Mrs Tan Ean Kiam nee Ng Hoon died at the age of 87 on October 24, 1997.
Son: Tan Tock San
A student at St. Andrew's School, Tan Tock San was the Chairman of Bank of Singapore and a OCBC director. He started from bottom up (despite the fact his father was the managing director), working has a remittance clerk during the Japanese occupation and climb up the ranks till finally he was the Chairman of Bank of Singapore (a OCBC subsidiary) in 1983. He also served as the director of OCBC from 1969-1995. He chaired the Tan Kah Kee foundation which donates money to charitable causes especially education and was also the chairman of the Thong Chai Medical Institution which offers free consultation and medicine to the elderly. He also sat on the board of Chinese High School. 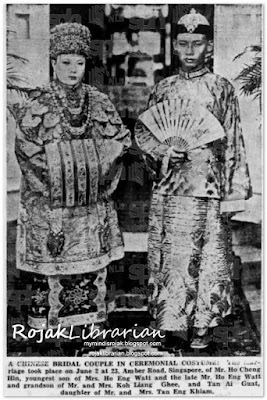 Brother: Tan Ean Teck
Tan Ean Teck was a prominent merchant and brother of Tan Ean Kiam. He was also a shareholder of the OCBC Bank. I don't have much information of what he did as a merchant, but during the Japanese occupation, he played an important role in keeping the local Chinese community who were resettled out of Singapore into a new settlement called Endau. Unfortunately, this involvement lead to his eventual demise as well  on April 19, 1944 at the age of 42. He is buried in Bukit Brown.
Brother: Tan Ean Long
Tan Ean Long passed away at the age of 46 on 16th February 1946. The last address that i could gather was from a notice for the deceased estate issued in 1951 by Tan, Rajah and Cheah, Solictors for Chinese Bankers Trust. Tan Ean Long passed away intestate and his last address was listed as No 20 North Boat Quay.

Tan Ean Kiam's lasting legacy continues to-this-date in the form of a foundation named after him, providing scholarships to deserving recipients as well as donations to charities and needy causes.