January 01, 2014 Bukit Brown exhumation Hill 2 pegged
I spent the last day of 2013 in Bukit Brown to take pictures of the changes that are taking place and say my personal final farewell to some of my favorite pioneers buried there.


All of the affected tombs in Seh Ong Hill, Hill 1, Hill 5 have been blocked and barricaded by the time i have reached Bukit Brown.The workers have started work on Hill 2 and it was there, where i headed for today.

One of my first stops is peg number 1876, the tomb of Madam Yap Woo (Mrs Peck Chin Kiat) who has a pair of Sikh Guards. This are the only unique pair affected by the highway.


Hill 2 was in the past also known as See Tiong Wah Hill. Mr. See Tiong Wah was one of the Senior Municipal Commissioners (together with Tan Kheam Hock) responsible for the formation of Bukit Brown Municipal Cemetery.  See Tiong Wah and his family (wife, mother, aunty, brothers, son, daughter-in-law, daughters and son-in-law) are unfortunately affected by the highway.

Another important cluster that is meaningful to me, is the beautiful Teochew cluster tombs of Mr. Lim Kim Seng, his 2 wives and his mother. I remember discovering their tomb and researching about this prominent Teochew pioneer in late January of 2012 and connecting with his grandson, James who kindly shared Mr. Lim Kim Seng's picture.
Beside this cluster is another belonging to Mr. Khoo Kay Hian, his wives and mother. Through an article i posted in July 2012, i managed to connect with his great grand daughter, Kim who shared his picture.

A tomb that exemplify the strength and love of a mother, Oon Tuan Cheng in providing for her family despite facing many setbacks (loss of her husband, Tok Cheng Tuan at the age of 38 and death of her two sons, Tok Kim Choon and Tok Kim Seng were taken by the Japanese in February 1942, never to return home, probable victims of the Sook Ching massacre.


For some of the tombs in Bukit Brown, they were relocated before from other cemeteries acquired by the Colonial government for development. In their case, there will be no more relocation. If left unclaimed, their ashes like the rest of the unclaimed remains will be thrown to sea.

Tombs that have been claimed by descendants would be exhumed first and they will have an additional peg on their tomb stating the date it was exhumed.


There are many many affected people, pioneers and this article can go on and on. I will add a few more pictures i took today and list some of the ones i researched before on and if i missed any, my sincere apology. 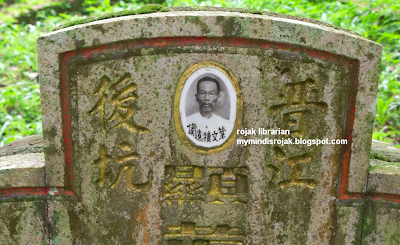 Hope for 2014
As the year closes, i look with sadness at the loss of heritage caused by the impending highway but also put hope that the awareness drive will continue so that the remaining parts of Bukit Brown can be saved as a Heritage Park protected for many generations to come. The research will continue and the discoveries will continue as well, as stories of the richness of Singapore's past unveils further and our pioneers stories and contributions continue to be shared for generations to come. Happy New Year 2014 !