January 05, 2014
Happy New Year to all ! It is the first weekend of 2014 and what better way to spent the first weekend in beautiful Ubin Island. It is the island which i used to regularly frequent until Bukit Brown came along. Although i do try to split time between this two lovely places, but because of the fragility of Bukit Brown right now, Ubin is taking a slight back seat. But hey ! it's the New Year and time to revisit this place for a leisurely walk.
Today, i must say is a good day for spotting butterflies despite the down cast or partly cloudy weather and light rain.


The light showers also made taking picture of spider webs much more fun as you can clearly make out the web made by the Golden Orb Spiders. 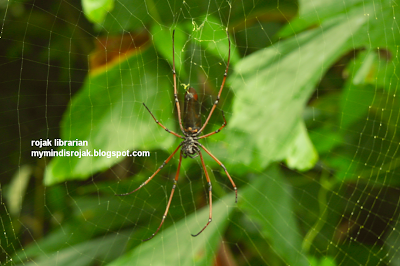 Not forgetting the birds, the Oriental Pied Hornbill is becoming synonymous with Ubin where a walk there, you should be able to hear them around. Spotting them depends on the element of luck although they are not rare nowadays and are residents here thanks partly to NParks nesting initiative. Other than the hornbill, i saw pink neck pigeons, blue tailed bee eaters, a solitary long tail shrike, grey herons, ashy tailorbird and a pair of Straw headed Bulbul.

After a 3 hour walk in Ubin, it was time to leave as the sky was turning worst. Nevertheless we had a good time in Ubin on the first weekend of 2014. May the new year bring us more discoveries !