In a court case that span several days, the defendant, Madam Ang Boey Neo (alias Ang Meow Neo) contended that the 3 women were just mistresses and not lawful widows. Wee Thiam Siew (brother of Wee Thiam Kee ) testified that Madam Ang Boey Neo lent her husband $3,000 (a sum she received from legacy of her mother-in-law's estate). The late Wee Thiam Kee then used the money to open a commission agency business  known as Hong Leong  in 1928 which eventually failed. He borrowed money from a money lender to repay her. According to Wee Thiam Siew, she eventually gambled away the money and since 1931 was not on good terms with Wee Thiam Kee and they did not live together.

Before Wee Thiam Kee passed away, Wee Thiam Siew in court said that a quarter share for the premises in 228 /229 Rochore Road was transferred to him as he was the residuary legatee (beneficiary) in his mother's will. Beside this, other property in the family comprised a branch in Hong Leong in Penang, cash in bank estimated to be $10,000 and property at No 30. Hertford Road. Wee Thiam Hock, the eldest brother also gave evidence that he help in the upkeep of Wee Thiam Kee's third wife ($30 a month) and fourth wife ( $40 a month). His younger brother, Wee Thiam Siew helped in the upkeep of the second wife.

Mr Justice Manning, Judge at the High Court ruled that the intention of Wee Thiam Kee and each of his wives at the time, they lived as man and wife and was to contract a permanent union. On that basis, they ( Khoo Ah Kow, Tan Beng Choo and Koh Cheng Keow ) were his secondary wives and were lawful widows.

Madam Ang Boey Neo (the defendant and first wife) said that she was married to Wee Thiam Kee when she was 17 years old, almost 20 years ago and they have gone through the full Chinese ceremony.

Madam Tan Beng Choo (who said she was the second wife) stated she was married to Wee Thiam Kee for 11 years, without ceremony but that on the night of the wedding, 2 or 3 dinner tables were laid out with Wee's friends.

Madam Khoo Ah Kow (who said she was the third wife) said that she married Wee Thiam Kee in the reform style and lived with him and they had a daughter together. She produced a photograph of their wedding. At that time of the wedding she was not aware of Wee's other wives. She met them only later.

Madam Koh Cheng Keow  (who said she was the fourth wife) testified she married Wee Thiam Kee 2 years ago (1937) in Penang. She was a refugee from Amoy and they met in Hong Kong. He had brought her from Hong Kong to Penang. From their union came a son. During a cross examination by the defendant lawyer, Madam Koh denied that she was cabaret dancer or dance hostess in Hong Kong. She further elaborated that she dance for leisure and the wedding was with the blesssing of her parents despite not going through the Chinese ceremony. When asked whether she was aware that Wee Thiam Kee had other wives, she replied "But i did not know that he had so many !" amid the smiles from court participants.

Death
Wee Thiam Kee (alias Wee Png Kee) passed away on February 19, 1939 at No 41-P Jalan Kemangan off Changi Road . Wee Thiam Kee is affected by the highway and faces exhumation. His peg number is 2939.

Family
Father: Wee Tock Kim
Wee Tock Kim is the father of Messrs. Wee Thiam Hock, Wee Thiam Siew, Wee Thiam Kee and Wee Thiam Liang. He passed away at No 14 Wilkinson Eoad, off Katong Road (near Katong Post Office) on June 9, 1929 at the age of 77. He is survived by 4 sons, 1 daughter and many grand children. He is buried in Alexander Road Cemetery. 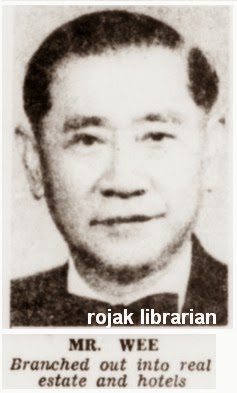 Wee Thiam Siew ( 1894-1972) was a well known millionaire property and hotelier. He was the chairman of the Lion City Hotel, Ban Leong Ltd, Wee Thiam Siew Co. He started by helping out in his father's business in a shophouse in Rochore Road at the age of 7. After leaving school (St Joseph and Raffles Institution) at the age of 16, he worked as telegraphist for the then Eastern Extension Telegraph Co. He later help reorganised his father's business and took up agency for the British and American tobacco companies. From there he expanded into property and hotel ownership. Wee Thiam Siew built his first hotel, the Seventh Storey Hotel in Rochore Road in 1953. In 1957, he built the Hollywood Theatre and in 1968, Lion City Hotel was completed at the cost of $4 million.

Wee Thiam Siew passed away on February 9, 1972 at the age of 81. The cortege left from 525 Dunman Road. His wife, Madam Lee Bong Seow passed away on August 16, 1986 at the age of 89. She is survived by 3 sons; Wee Aik Leng, Wee Aik Koon, Wee Aik Sun, 3 daughter-in-laws; Tan Aun Yoke, Teo Poh Lian, Bebe Lim, 4 daughters; Wee Ah Chuan, Wee Aik Kek, Wee Hum Looi, Wee Lye Choon, God daughter; Ong Moo Kia. The cortege left from 525 Dunman Road.
229 Rochore Road
229 Rochore Road (assuming the road numbers did not change from the 30's and 50's ) is the site of the iconic 7th Storey Hotel Bar and Restaurant and also houses Ban Leong and Co. In 2008, the government announced that they will acquire the 38-room New 7th Storey Hotel for the purpose of the building of the Down Town Line underground station