In 21 December 1934, Madam Tan Keng Neo put out a advertisement removing his son, Seow Tiong Teck from being able to act on her behalf on his belated father's estate. Madam Tan Keng Neo was granted probate and executioner of her late husband's estate on February 21, 1930. Seow Tiong Teck passed away at the age of 75 on 21 August 1976.
In an auction notice dated April and August 1933, Seow Eng Tin had land in No. 15, 16. Jalan Station in Kluang, Johore with each at 1,800 sq ft as well as 42 acres of land in Johore Bahru which are planted with mostly rubber trees. This indicates that Mr. Seow Eng Tin had a number of properties both in Singapore and Malaya. 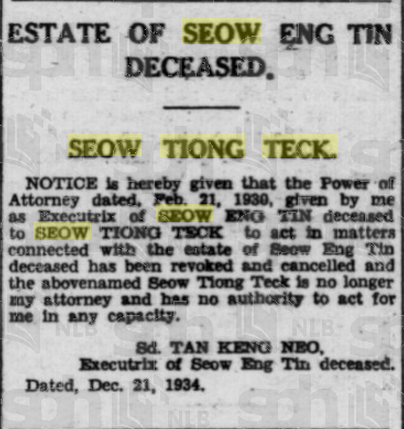