May 11, 2014 Block 3 Div D Bukit Brown Hill 3
While exploring Bukit Brown Hill 3 Division D, the picture of a nyonya (a Straits Settlement lady) with 3 kerongsang (brooch) on her dress caught my eye. The tomb needed to be cleared before i can make out her name. After clearing her tomb of the bird nest fern that was growing on its altar table and chalking the words, it was revealed to me that it is the tomb of Madam Ong Mui Gek, wife of the late Mr. Tan Hee Thye, and that she passed away at the age of 73 at her residence, No 216 Marine Parade on 31 October 1935. Madam Ong Mui Gek is the mother-in-law of Mr. Chia Eng Say, a well-known merchant of Singapore and Penang.  Madam Ong Mui Gek leaves behind 1 son, Mr. Tan Ah Pow, 1 daughter, Madam Tan Ah Nee (Mrs. Chia Eng Say),7 adopted daughters, 32 grandchildren, 4 grandsons-in-law, Messr. Chuang Chu Lin, Tan Yoke Chye, Tan Siang Her and Tan Hong Chuan , 1 grand daughter-in-law, Mrs. Chia Teck Soon and 8 great grandchildren. 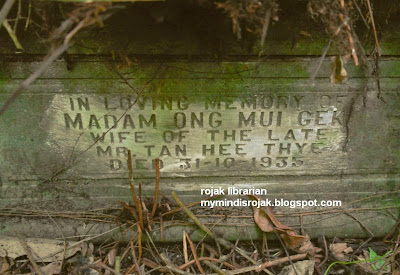 Chia Eng Say passed away on 15 February 2602 (1942). Chia Eng Say died on the day that Singapore fell to the Japanese and he died without making a will. His residence was last listed as 213 Marine Parade and the administrators of the estate were Tan Ah Nee, Chia Teck Soon and Chia Oh Kang
His estate were valued over a million dollars.
.
Chia Eng Say owned the quarry at the Chia Eng Say quarry in Bukit Timah (8 and 3/4 mile) (likely the Singapore Quarry at Chia Eng Say Road off Bukit Timah) and had the license to quarry at Mandai and and Ubin. Chia Eng Say was also a  building contractor and he tendered for many projects. Some included;
Chia Eng Say in November 1924 won a tender for the erection and completion of Warrant Offcer's Quarter and Guardroom at Fort Canning.
Chia Eng Say in September 1926 won a tender for the construction of the new Poh Leung Kuk Home at Perarl's Hill, Singapore.
Chia Eng Say in November 1930 won 3 contracts for buildings at the Penang General Hospital. This included his tenders for 3 blocks of third class wards ($590,000), isolation cells and transformer room ($38,000) and nursing staff quarters ($162,000).